The sweet smell of flame-broiled desperation 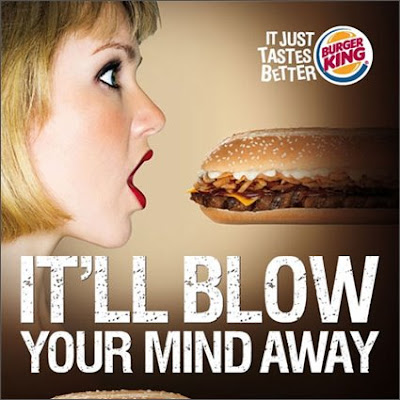 Not exactly subtle, eh? But what else can we expect from the corporation that managed to put Spongebob Squarepants and Sir Mix-A-Lot in the same spot:

Some people found this pretty amusing; others did not.

My interest in all this is how Burger King, as a "challenger" brand, is resorting to increasingly desperate viral campaigns in the face of tumbling profits. Sure, they're coming up with some very entertaining gimmicks, like joke marketing "Flame", "the body spray of seduction, with a hint of flame-grilled meat" and using a hilariously saucy web site to make it viral. (Although I did feel like I might catch something from it...)

But what about the basics? Perhaps "the only thing worse than being talked about is not being talked about", but I can't see how BK's innovative marketing efforts are going to get people to crave their hamburgers. A cheeseburger is just about my favourite food on the planet, but Burger King seems to have forgotten what they're selling. On the other hand, I thought Harvey's "Meat. Fire. Good." campaign of a few years back was just about the best primal pitch of all time. They know why I go there; they just need to keep reminding me.

In my humble opinion, Burger King needs to focus on the food. I haven't eaten a Whopper in years, and I'm not going to start because the company has a wicked sense of humour. Besides, no matter how cheeky a corporation gets in its advertising, the Internet can always do them one better (found posted on Fark.com): 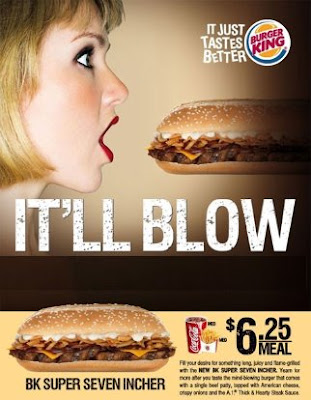 That about sums it up. It's not the kind of fast food I'd be willing to lose friends over.
Posted by Tom Megginson at Thursday, June 25, 2009