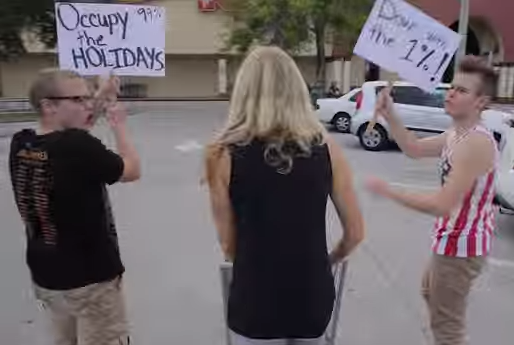 Last week, an organization calling itself "Worker Center Watch" launched a campaign to discredit the Walmart workers who staged protests across the United States to target Black Friday sales. Among the thousands of Walmart employees, the protests included labor union organizers and members there to push for living wages and more full-time positions.

According the The Nation, Worker Center Watch was registered by the former head lobbyist for Walmart, Parquet Public Affairs. They call themselves "an Issue Management, Communications, Government Relations and Reputation Assurance firm."

So yeah, astroturfing. The idea of "professional protestors," who are simply mercenary layabouts, is a populist tactic used to discredit all kinds of demonstrations.

The Walmart protests were, in fact, organized by "outside agitators." The union-backed Organization for Respect at Walmart (OUR Walmart) calls itself "an independent, not-for-profit organization for hourly Associates." In other words, it's pushing for unionization.

Between Walmart and "union bosses," I side with the labour organizers. Their demands are simply a $15/hour wage and full-time hours. A corporation that pays its hourly employees so poorly that they need to do an internal food drive just to make sure everyone can feed their families will never be a hero in my mind.

(Thanks to John Hardy for the tip)
Posted by Tom Megginson at Wednesday, December 03, 2014