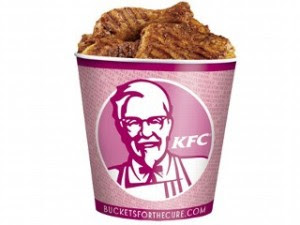 KFC has provoked cries of hypocrisy over its latest corporate social responsibility campaign, Buckets for the Cure. 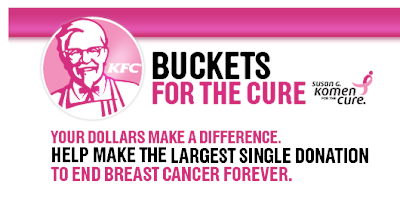 The basic deal is that 50¢ from every special pink bucket will go to support Susan G. Komen for the Cure, an important charity in the fight against breast cancer. With a minimum $1,000,000 donation, and over $2,800,000 raised so far, this represents the single largest donation Komen will ever have received.

That's the good news. The campaign Facebook page gives the lunchbag letdown that corporately, KFC operators have already made a 50¢ donation for every pink bucket they bought, and that your purchases of pink chicken buckets make no difference. (Even though you are encouraged to donate directly.)

More disturbing is the menu at the top of the page: 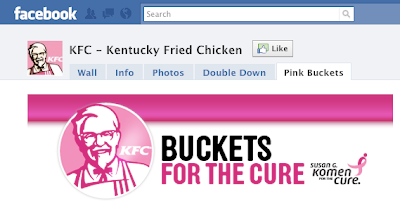 That's right. The Double Down. Perhaps the greasiest breakthrough in fast food innovation since gravy pizza. But I've already blogged about that. Just in case you're wondering about how it's being marketed: 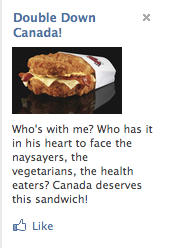 This rant, though, is more about pinkwashing. Borrowed from the popular term "greenwashing", which describes a misleading environmental stewardship campaign, pinkwashing is the health version. Specifically for breast cancer.

How pinkwashed is this campaign?

From the Komen site:

Yoiks! Perhaps that chicken should come with an age restriction.

But cynicism aside, I realize how important a big contribution like this is in the fight against cancer. It's just unfortunate that it's coming in parallel with a move towards serving less and less healthy food. It has actually led to some pretty harsh criticism and satire aimed at Komen.

And speaking of health causes, our iheartmom.ca campaign for women's heart health is now in week 2. Please join Joannie Rochette and the University of Ottawa Heart Institute to raise money and awareness to fight heart disease — the #1 killer of women in North America.
Posted by Tom Megginson at Monday, May 03, 2010