I no longer weep for the future

One of the latest "kids today" rant topics is how demanding they are when it comes to the big high school party: the prom. USA Today reports that today's spoiled teens can demand an expense of $3000 and up on their big night. WikiAnswers suggests $200- $1000.

Which is why I was so impressed when I heard that my niece, Emma Robinson, and a number of her classmates at Ottawa's Nepean High School did something a little different. They hired what we like to call "The Red-And-White Limo": 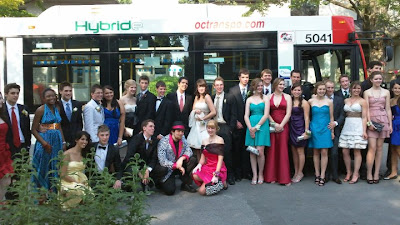 That's right. The latecomers of the dreaded Generation Y are chartering public transit to their night to remember. And a hybrid bus at that! It's enough to make this longtime transit marketer all schmoopy.

Emma tells me that, split about 25 ways, the bus cost them just $12 each. Plus, of course, it meant no drunk driving at the prom. It was organized by her classmates Molly Hotson and Jasmine Silver.

"The whole idea behind this was that prom doesn't have to be serious or expensive, it's just a fun end to high school," she says.

Emma, who recently won a Cappie for her costume design in Nepean H.S.'s production of A Funny Thing Happened on the Way to the Forum, took the fun one step further when it came to dressing herself and her date, Jacob. She made their clothes from scrap: 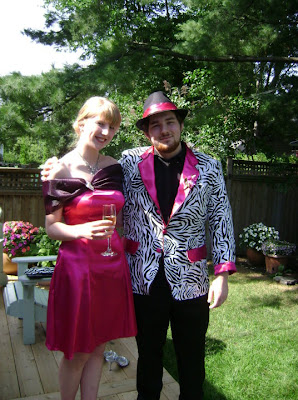 "Well, I wanted a relatively cheap prom," she explains. "The total cost of the fabric for my dress was $70. I went for a combination of retro glam and the traditional sort of prom princess look (by choosing the fuscia pink fabric). The suit jacket was a homage to all the ridiculous costumes I've put Jacob in over the years. It cost around $60. I used a $10 jacket from Value Village as a base, then added the zebra over top."

Responsibility? Creativity? Not taking themselves too seriously?

The kids are alright.
Posted by Tom Megginson at Tuesday, June 29, 2010