Coal power sucks. Have you ever really looked at an urban photograph from 100+ years ago? Those black clouds aren't rain.

And yet coal — an industrial era technology — continues to be a major source of energy around the world. The US leads the dirty charge, with 45% of its electricity coming from coal.

While regulators have a role to play, so do consumers. And that's why Greenpeace has decided to use the power of social media to try to shame Facebook founder Mark Zuckerberg into using sustainable energy to power his network. 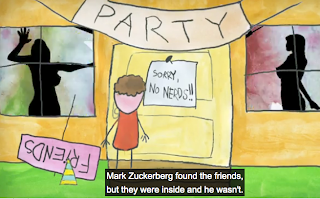 A company such as Facebook, which now has 500 million users world-wide, can have both a direct and indirect effect on this reality. Direct because the company can reduce its own greenhouse gas emissions by phasing coal out of its electricity use. Indirect in that a true display of leadership will set a high bar for the rest of the industry and help catalyze a clean energy transformation.

Pretty amusing stuff. And timely, given that "The Social Network" is about to premiere. Can it work? That's up to us...
Posted by Tom Megginson at Thursday, September 16, 2010