This week, I talked about an atheist campaign set to run next year in Toronto. But those guys may want to cancel the media buy and spend their money on more immediate gratification, since this American campaign informs us that the world will end on May 21: 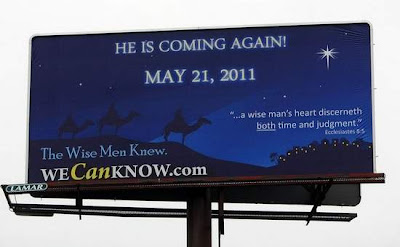 Paid for by the rapture-ready fans of Family Radio Worldwide, the campaign is set to run in nine cities across the United States.

Apparently, this date is the result of some Biblical math:

Thus Holy God is showing us by the words of 2 Peter 3:8 that He wants us to know that exactly 7,000 years after He destroyed the world with water in Noah’s day, He plans to destroy the entire world forever. Because the year 2011 A.D. is exactly 7,000 years after 4990 B.C. when the flood began, the Bible has given us absolute proof that the year 2011 is the end of the world during the Day of Judgment, which will come on the last day of the Day of Judgment.

And the organization adds this family-friendly message:

We learn from the Bible that Holy God plans to rescue about 200 million people (that is about 3% of today’s population). On the first day of the Day of Judgment (May 21, 2011) they will be caught up (raptured) into Heaven because God had great mercy for them. This is why we can be so thankful that God has given us advance notice of Judgment Day. Because God is so merciful, maybe He will have mercy on you.

Nah, I think I'll be too busy that day to face the ultimate judgement. I'd much rather spend the time teaching my son why we need to plan and work for a better future in this world.
Posted by Tom Megginson at Saturday, December 04, 2010