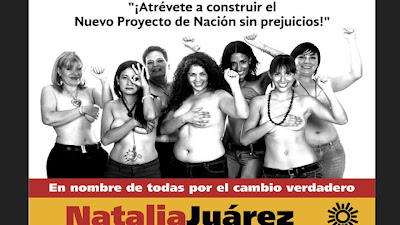 According to Jezebel, Natalia Juarez is a 34-year-old philosophy professor running for Congress as a member of the leftist Party of the Democratic Revolution.  The headline reads, "I dare you to build a new project for a nation with no prejudices." The other women are also PDR candidates.

Jezebel's Erin Gloria Ryan is a little cynical about the use of "boobies" to get attention, but I applaud any effort in which women take back ownership of their bodies by using our primal fascination to deliver messages of solidarity for social change.

Here's another one of her party's ads, via The Greenwich Diva:

Ms. Juarez told CNN, "Society is lethargic. We don't seem to be aware of our role. We need to get energized. We need to tell people, 'Hey, wake up because if you don't, sharks are going to eat you up. Wake up, you citizen and politician'"
Mexico will hold presidential and congressional elections on July 1.