The 5 worst kinds of "sexy" Halloween costumes at Yandy.com

Yandy.com is known for its ridiculous contributions to the "sexy ____" Halloween costume epidemic, helping young women provide their male friends with a plethora of unspeakable fantasies, from sexually available french fries to women dressed as Bugs Bunny (who, admittedly, was attractive when he put on a dress and played a girl bunny).

Here are some doozies:

Runners Up: "Sexy Working Women Who Get Sexually Harassed on The Job"

Nurses. Flight Attendants. Domestic workers. Whatever it takes to minimize women's serious contributions to the workforce.

5. A Pink Frisky Leopard "For The Cure"

Hell Hath No Furry Like a Pinkwashed Sexy Leopard. But hey, 10% of the proceeds from the sale of this thing "will go to benefit breast cancer research and awareness".

What do you get when you combine sexism, racist stereotypes, and a lighthearted look at prostitution in one costume? Yeah. Just don't.

I don't know why girls' private schools still insist their students wear kilts. The fetishization of "school girls" reeks of Nabikovian ephebophilia. And feeding the fetish at Halloween isn't helping stop the sexualization of teenagers.

My brother-in-law, Dave, who is part of the Canadian First Nations community, told this story today:

I was in a Halloween shop with my kids when the clerk came over and asked: "Can I help you find anything?" I then asked him:"Yes, do you have any 'Black suits'?" I told him that I wanted to go out as a 'black guy' for Halloween. He said "No". Then I asked him: "Well how about Jew suits... do you have any Jew suits?" Again he said "No!" I asked him if it seemed offensive and he said while scratching his head: "Well...yeah, it would be." Then I pointed at the Native American outfit they were selling and said: "So is that..." 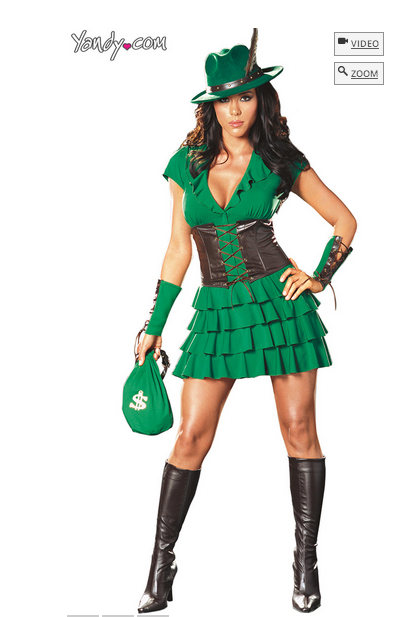 This stupid costume, racistly called "Robyn da Hood", was not a particular standout until last week, when it appeared in a rather notorious Instagram and Facebook photo:

That's right — if you really want to stink up Halloween, you can now dress up as Caitlin "Kt" Cimeno, the woman who showed the world how racist young white Americans can still be. She's pictured with her brother, Greg Cimeno (as George Zimmerman) and friend William Filene (in blackface, as Trayvon Martin).

How meta would that be? It's a little late to order now, but there's always next year.
Posted by Tom Megginson at Tuesday, October 29, 2013