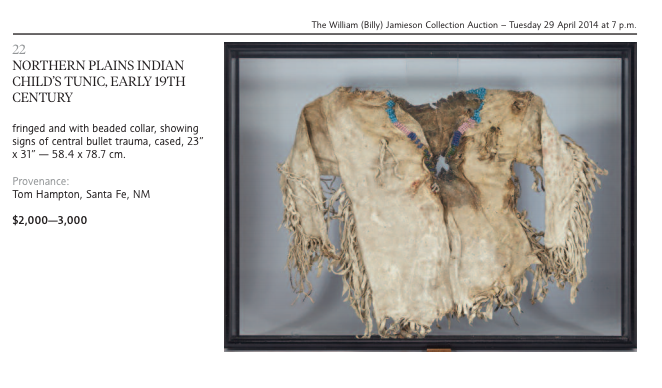 Former APTN reporter and Ojibway factotum Tim Fontaine Tweeted this item from a high-end auction brochure from Waddington's in Toronto.

That's right. It's a child's shirt. From the time when Americans were pushing westward through the Great Plains of the continent, slaughtering bison — and often, human beings —in the name of Manifest Destiny.

This artifact is one among dozens that belonged to anthropological collector Billy Jamieson, who died a few years ago.  The auction house says it was purchased originally from Tom Hampton in Santa Fe, New Mexico. How Mr. Hampton came upon it is not mentioned. But it is valued at $2-3,000.

Mr. Fontaine updates that the post is no longer on the Waddington's site. (He complained via e-mail.)

The page on the Waddington's site with the dead child's shirt is down. Took a grab from the catalogue: pic.twitter.com/IZgWR2qB2y
— Tim Fontaine (@anishinaboy) April 28, 2014


So, why is this a problem? After all, we have no idea who shot this child. It could have been anyone, even another Native American.

No matter what the original provenance of the tunic, it is evidence of a historical murder of a child, within the context of what many consider an era of attempted genocide of Native Americans by European settlers.

It's not a historical curiosity. It is a symbol of horror. And I hope it will be repatriated soon to the unfortunate child's people for proper respect, rather than becoming a conversation piece in another rich guy's parlour.

The auction is tomorrow. Waddington's contact info is here.

Looks like the shirt has been removed from the auction: http://t.co/h4hlswtsHW (thanks to @kimpweaver for pointing this out)
— Tim Fontaine (@anishinaboy) April 28, 2014

You can still see the original catalogue here.

UPDATE: The issue has been picked up by mainstream media.
Posted by Tom Megginson at Monday, April 28, 2014