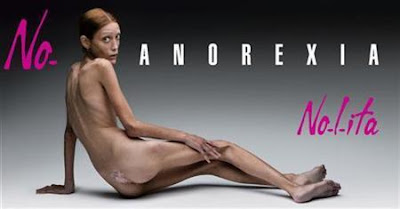 Oddly, reports of the original campaign in 2007 stated her age at that time as 27, while other sources say she was born in 1980 — making her all of 30 at the time of her death. This is strange, because if she had really only been 25 when those photos were shot, that fact would have made the campaign all  the more shocking.

Caro had been battling anorexia since adolescence, and she had said that she allowed herself to be photographed by Oliviero Toscani because:


The campaign shocked sensibilities even in naked-ad-saturated Italy, and was eventually banned by the country's advertising authority because it violated a rule that "Marketing communication should not offend moral, civil and religious beliefs. Marketing communication should respect human dignity in every form and expression and should avoid any form of discrimination."

Instituto dell’Autodisciplina Pubblicitaria (IAP) President Giorgio Floridia stated, "The photo is shocking for everyone, particularly those who are sick, and has been set up for commercial ends."

Isabelle weighed just 68 pounds at the time of the shoot. According to Wikipedia, she died over a month ago in Tokyo (of acute respiratory disease) but her family only reported the news to media yesterday.


A sad ending to a sad story.
Posted by Tom Megginson at Thursday, December 30, 2010