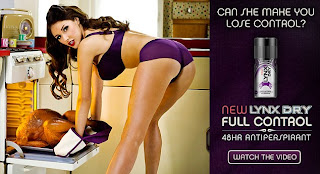 According to Adfreak, a series of online ads for Lynx (Axe) deodorant have been banned by the UK's ad authority for implying that "using the advertised product would lead to more uninhibited sexual behaviour" and concluded, "we therefore considered that the poster would be seen to make a link between purchasing the product and sex with women and in so doing would be seen to objectify women."

I'm sure anti-rape groups will also be outraged at the implication that it's okay for a man to "lose control" when he sees a woman sexualized like this. But in context of the other ads in the campaign, the pun is made more clear: 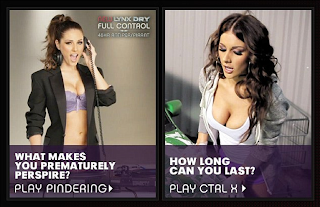 I just find the ads irresponsible and degrading to their young male masturbathlete target market as they are to the model (who is at least getting paid). But I still think banning them is the wrong idea. Better to just expose this crap for what it is — lazy, sexist advertising.
Posted by Tom Megginson at Wednesday, November 23, 2011