The most confusing thing I have seen all week

Fortunately, it's only Monday morning. 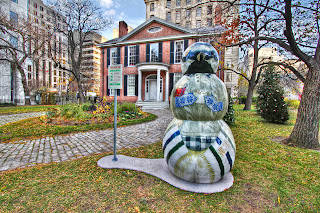 It's an ambient idea from CP+B Canada, for Tourism Toronto. But what is it?

According to the submission on Ads of The World:

"In order to curate the vacation photos Toronto visitors take and put online, we unleashed 21, 8-foot snowmen designed by top contemporary artists and placed strategically at key tourist spots in the city. When you take a photo with the snowmen, a famous Toronto scene is featured as the backdrop. And to encourage the photos would be shared, Tourism Toronto is donating $2 to Starlight Children’s Foundation for every snowman photo uploaded to the campaign’s Facebook page at https://www.facebook.com/visittoronto, up to $50,000. And, we’ve integrated each photo takers’ network, by offering another $1 for every ‘Like’ each photo generates, further expanding this campaign’s reach. To date, more than $24,000 has been raised."

I would like to point out that this submission comes from a country in which English is frequently spoken. "In order to curate"? Okay, that's just shitty jargon. But the rest of the write-up is similarly convoluted.

They set up giant snowmen in popular Toronto tourism photo op sites, then provided a fundraising incentive to share them on Tourism Toronto's Facebook page and get their friends involved. Was that so hard to say?

I am amazed that such a famous agency brand would leave the adblog PR to someone who don't write good.

But the most confusing thing about it all is this: 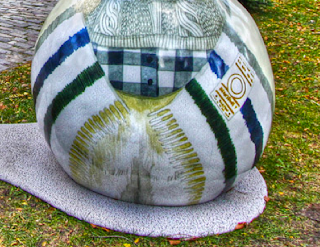 Why does the snow"man" have a vulva?
Posted by Tom Megginson at Monday, December 12, 2011