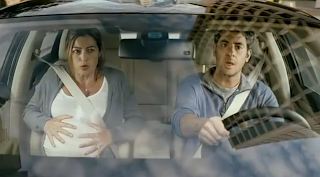 Noah shared with me a post from Art Threat titled "Why is CBC running sexist Volkswagen ads?", because he knows I can't walk away from a good ad outrage.


And here is the rage:


"The story’s focus quickly turns from the pregnant woman to silly interactions between the husband and the paramedic on different features included in the new Passat. While the viewer is naturally curious about the pending child delivery that launched the ad narrative, the camera cuts to extended interior car shots, completely erasing the pregnant woman from the visuals.

Cutting back to the unfolding scene, the woman cries out for help as the guys incessantly confer on the car. “Starts with a button?” asks the paramedic. “Sure does” responds the husband, continuing on in blatant disrespect to a woman in need of support.

The ad finishes with the husband swinging the driver seat door closed on the pregnant partner calling for support. “Guys? Having a baby here!” cries the pregnant women as the men stupidly admire the car.

This Volkswagen ad, rooted in a overtly sexist storyline, clearly crosses a red line in celebrating an automobile over human life."

The author, Stefan Christoff, then proceeds to talk about the toxicity of (North) American car culture, referring to the Passat vid as a "disturbing ad celebrating a new car over childbirth".

But me, I'm just not feeling it. For all my ranting about sexism in advertising, cultural cancers like car obsession, and threats to the sacredness of motherhood, I just can't conjure up any outrage over this ad. None.

The ad, by Toronto agency Red Urban and director Jean-Michel Ravon, certainly does cross a line. But it's not a line of sexism, for me, it's the line of absurdity.

Online ads, like this one, need to be entertaining to hold viewer attention. This one is comedy. And I think there are both men and women in the target audience who will find it funny.

The concept could have used someone in another urgent hospital situation, but that would not have been as funny. The very fact that we so cherish motherhood, that for the man this should be the most important day of his life, that the paramedic is supposed to be 100% focussed on the patient... all the kinds of wrong that this scenario is are essential to its entertainment value.

Does it trot out the tired old "clueless husband" trope? Definitely. That's the most sexist thing about this ad, the way it treats the men. The woman, on the other hand, is the "straight man" in all of this. Her awareness of the seriousness of her situation anchors the complete absurdity of the guys' reactions.

It's not a great ad. But I think it is an effective one. And I don't think any women were harmed in the making of it.