I miss the good old days of ugly Lego 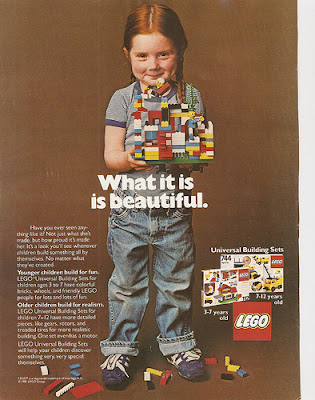 This Lego ad, from about 1981, is immensely popular on the internet circa 2012. It, and two others of the same vintage, were recently featured on the academic blog Sociological Images as examples of gender-neutral marketing of children's toys.

SI's Lisa Wade contrasts the Lego of her childhood with today's more gendered Lego sets for girls that put women back in the kitchen: 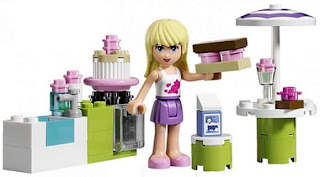 Or the beauty shop: 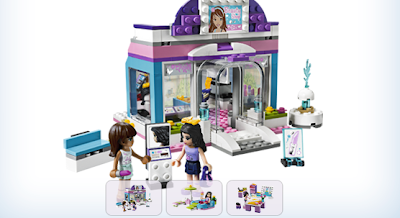 Granted, there are lots of different Legos for kids, but this is the one Mastermind Toys lists as "a brand new LEGO world for girls!"

I get it. I only have a son myself, but all of his little girl friends have totally bought into this whole "princess" thing — even though their parents are socially progressive yuppies like me. Kids should be able to (safely and responsibly) play however they want with whatever they have (my son has started making "spy weapons" out of cardboard tubes) so is there really a problem here?

Lisa writes, "In the circles I run in, it’s being roundly criticized for reproducing stereotypes of girls and women: domesticity, vanity, materialism, and an obsession with everything being pastel."

By the way, this controversy is a few months old already. What inspired me to weigh in was an even older Lego image, from a 1973 catalogue, that was featured on Retronaut: 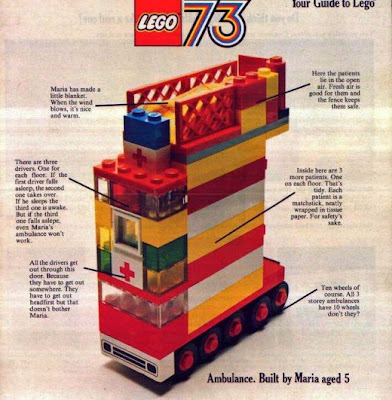 This was around the time when I started playing with the iconic blocks, almost 40 years ago. Note that the craptacular ambulance built by 5-year-old "Maria" could have just as easily been built by "Mario".

And then it hit me what the real problem is.

Lego stopped being a "blank slate" imagination toy sometime in the '80s. While you can still buy plain blocks if you look hard enough, Lego is now much more about getting kids to act out branded and scripted narratives than asking them to start from scratch. 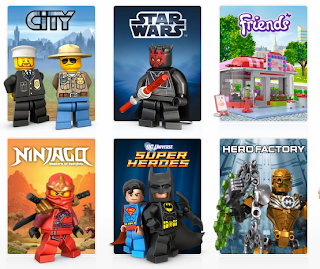 Here's an example. It's the bio of "Emma", one of the Lego Friends:

Favorite animal: Horse, Robin
Hair color: Black
Favorite color: Purple
Favorite food: Fruits and veggies. And chocolate. And cupcakes. And pizza…
I love: Designing clothes and jewelry, crafts, interior decorating, remodeling and horseback jumping.
I’m also good at: Yoga, giving makeovers, martial arts, making origami animals.
My friends think I’m sometimes: Forgetful, but I never forget to accessorize.
I want to be: A designer
Motto: “That’s SO you!”
I would never: Leave home in clothes and accessories that don’t match!
I like to hang out: At the beauty salon and my design studio.


There is literally nothing left to the imagination here.

Toys representing fictional characters with complex backstories existed when I was a kid, too, but not in Lego form. Instead they were "dolls" and "action figures".


So my question is, should Lego be held to account for defining and gendering the play narrative for its dolls and action figures more than any other toy company?

To be fair, no. Parents do not have to buy these sets for their daughters, and they could well buy kitchen sets for their sons. It's just another company in the business of making money by giving kids (and parents) what they say they want.

I think the real shame here is that a classic toy that engaged children in unique imagination exercises 30 or 40 years ago has become just another product tie-in to increasingly monotonous children's entertainment. And part of this monotony is the cute girlie-girl thing. 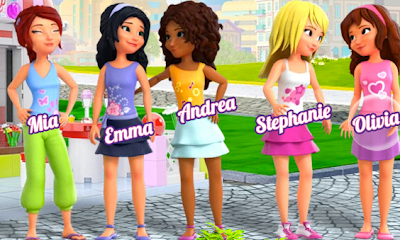 I just miss my ugly, impractical Lego machines and houses. And I miss ads that sell nothing more than imagination. But then again, I miss being able to lose myself in a bucket of plastic bricks for an entire afternoon. 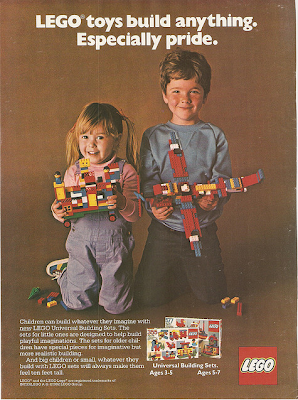 There is hope, though. In some places, Lego and its advertising still rock.

Email ThisBlogThis!Share to TwitterShare to FacebookShare to Pinterest
Labels: 1970s, 1980s, gender issues, How to be a Retronaut, Lego, Sociological Images