Update: Wendy's e-mailed me with the following:

"Thank you for mentioning the Wendy’s Poutition in your latest blog post. We just wanted to clarify that we have yet to reach our goal of 100,000  signatures (we’re at 2,465 as of today)."

Which confused the hell out of me, because the "progress" graphic said they had reached their goal. (Turns out its the default screen you get if you try to look at the "poutition" without "liking" the page first.)

Anyway, if you want to pitch for poutine, you still have a chance... 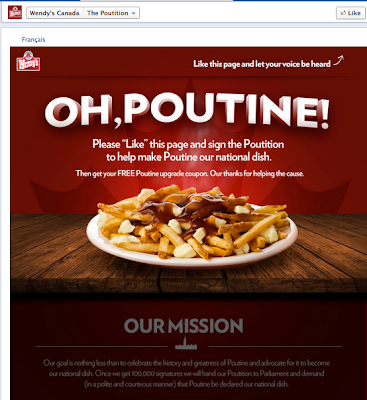 In a pretty clever Facebook promotion, Wendy's Canada is asking Canadians to "like" its page and sign the "poutition". If they get 100,000 clicktivists, they say they'll officially submit it to Parliament for consideration. 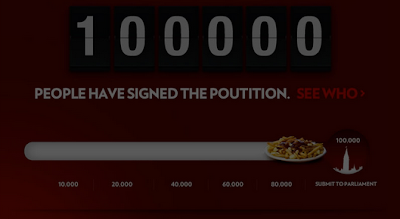 And they've apparently made it.

I assume the Opposition NDP will support the motion, seeing as they have so much support in poutine's homeland of Quebec. And the majority Conservatives, who were mostly shut out of seats in Quebec, and are still looking to make in-roads to the major Ontario urban centres where poutine is popular, will find this issue worth considering. (The third-party Liberals, in honour of long-serving Prime Minister Jean Poutine, will likely vote on party lines.)

The idea of making a classic Quebec comfort food Canada's "national" dish is likely to cause some controversy, however. First of all because it is already a "national" dish in the nation-within-a-nation that is Quebec. Second, many Westerners have yet to be converted to the ultimate junk food.

Even Wendy's has seen fit to make this an opportunity for the "Rest of Canada" to make Quebec feel more loved, even going so far as to parody the federalist slogan "My Canada Includes Quebec". 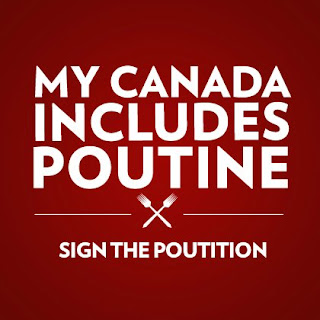