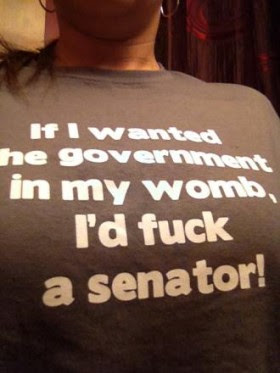 The shirt in question is pretty hardcore. Too hardcore for American Airlines, who booted an unnamed passenger off a connecting flight for wearing it, according to Think Progress.

Interestingly, the post points out, the phrase was coined by an actual Senator, Oklahoma District 11 State Senator Judy Eason McIntyre, who Jezebel says showed up with it at an Oklahoma rally against the (since-struck down) "Personhood bill".

And that raises interesting questions about the evolution of everyday language. On its own, I'm not surprised a shirt that said "fuck" in big letters rattled the staff at American Airlines. They're scared of fretful parents causing a fuckstorm of bad press.

But when a democratically elected Senator has used the same words in a political statement, does the "fuck" become part of a protected right to free expression? If the dreaded F-bomb is now so commonplace in the conversation of educated and mature people, can we really claim a right to protect our children from it?

Things are getting passionate down there, while the election heats up. I expect to see and hear many more fucks to come.

You can read the original (second-hand) story at RH Reality Check.
Posted by Tom Megginson at Thursday, May 24, 2012