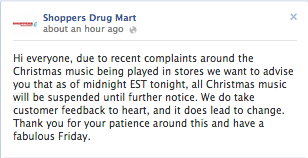 As a friend mentioned, they were apparently responding to complaints about the music coming on too early.

You see, Canada used to have an unspoken rule that Christmas festivities didn't start until after Remembrance Day on November 11, out of respect for our war dead. But with retail Christmas creep pushing the shopping season well before Halloween, stores are no longer respecting that.

However, as you can see from the post, they didn't do a very good job of it. And that's all it took for a bunch of "nice" Canadians to launch into a flurry of racist and anti-immigrant rants:

This is just a sample, and they are of course cherry-picked from the mass of intelligent comments. But they were not hard to find.

Canada, we still have a long way to go.