Jesus has a quickie with Lady Liberty in Ukrainian shock ad 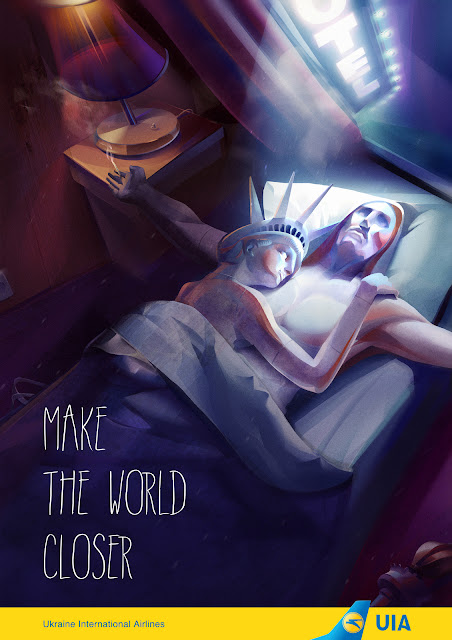 The giant Jesus statue from Rio de Janeiro and New York City's Statue of Liberty enjoy a post-coital cuddle in a sleazy motel in this ad for Ukraine International Airlines.

While Christian blasphemy is hardly an original tactic to get attention, I question whether this ad ever really ran in Ukraine. Not because of the English — ads are typically translated by agencies looking for international attention and awards. I assume this because Ukraine is still pretty religiously conservative, and I doubt such a large brand would risk a boycott just so their agency can win some award.

Can any Ukrainian readers confirm or deny the ad's placement anywhere there?

UPDATE: My Ukrainian friend Eugene Smirnov has confirmed to me that the ad is, in fact, fake. This post on Adme.ua (in Russian) explains that UIA claims on Twitter that it had nothing to do with the ad, and UkraNews adds that it was done as a joke by someone named Alexander Bozhko for "Altai Fake Festival" which sounds like something akin to the Chip Shop Awards.

Eugene also provided me a translation of a statement by Mr. Bozhko:


This morning my print with two statues appeared on many web sites, and was seen by many people very seriously to my surprise. Hence the need to clarify the situation.

It's not an ad for UIA. It's not advertising at all. This is fake, without a brief or a client, which was made in my spare time, as a first attempt at advertising.

This work was intended to be sent to the Altai Fake Festival. Inadvertently, it came to the home page of Ads of the World and from there to other sites. I make every effort to make this work out to remove right now.

And now the most important thing: I apologize to UIA. And I hope that this work will not create the illusion that this is their communication... and will be seen as a joke, which it is.

It's always been dangerous to do fake ads for fun. With social media, can be downright disastrous.

Great PR for Ads of the World, though...

Via Ads of the World

Email ThisBlogThis!Share to TwitterShare to FacebookShare to Pinterest
Labels: Ads of the World, blasphemy, jesus, Religion, statue of liberty, ukraine