Molson asks: Are you on a "Guyet"? 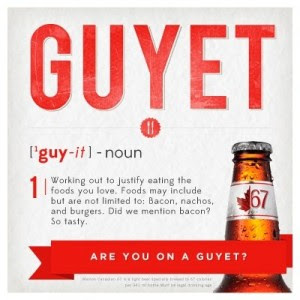 Beer advertising for men has always had a certain dufus appeal. This new campaign for Molson's 67-calorie beer is no different:

Jean-Yves Beaudoin, assistant marketing manager, Molson Coors, says that the campaign is different for the brand because it’s aimed more at a mindset and a lifestyle than a demographic.

“‘Guyet’ is a way of life.  It’s not about indulging in crappy food all the time, it’s about exercising properly so you can rationalize eating things you love, like burgers with bacon,” he says of the insight behind the campaign.

Which is the way lots of us live, but why brand it just for men? Lots of women I know like burgers and beer, and still try to balance their intake with healthy activity.

The obvious answer is that it's not an easy sell to get guy's guys to be seen drinking lower-calorie beer. At least, that's how I deconstruct the challenge given to the creative team at Rethink.

Presumably, they have research to show that the men they want to sell to don't want to admit to being on a "diet" or drinking "light beer". Instead, they exercise hard and eat hearty, while drinking a lower-cal beer that in no way compromises their masculinity.

Pretty strategic advertising, actually. Even if it doesn't have the most progressive take on gender.