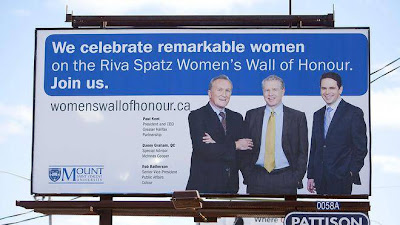 According to Halifax's Chronicle Herald:

The billboard promotes a Mount Saint Vincent University campaign for its Women’s Wall of Honour project, a tribute that will be erected outside the new Margaret Norrie McCain Centre for Teaching, Learning and Research when it opens in December 2014.

For a donation of $1,200, honourees’ names will be included in the Wall of Honour and their stories will be shared on an associated website.

The men are all donors to the campaign. Which is great. And the campaign itself is a good one. But the paternalism of the billboard, even if unintentional, is baffling.
Posted by Tom Megginson at Wednesday, April 03, 2013