David Bowie gets his new video banned by YouTube 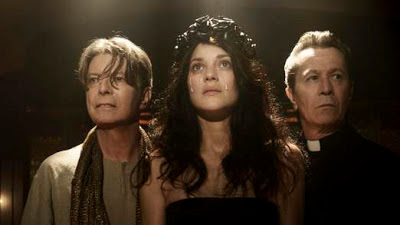 Apparently, getting people to censor your work for offending religious sensibilities isn't just a young man's (or woman's) game. At the ripe old age of 66, David Bowie has managed another PR coup by having the latest video release from The Next Day get pulled by YouTube for an apparent violation of its Terms of Service.

Sky News reports that the video, directed by Floria Sigismondi and featuring Gary Oldman and Marion Cotillard, was yanked yesterday—the very day it was released.

Sky's description is as good as any:

It depicts Cotillard - the French actress who won an Oscar for her role in La Vie En Rose - as a dancing girl who bleeds from stigmata marks on her palms, while Bowie plays a Jesus-like figure in robes fronting his band in a seedy basement bar.

Oldman plays a priest who dances with Cotillard. As she sinks to the floor bleeding from her hands, Oldman turns to Bowie - dressed in what appear to be sackcloth robes - shouting: "You see this? This is your doing - you call yourself a prophet?"

Cotillard's wounds spray blood all over a topless, veiled woman before she rises again dressed in black with tears on her cheeks and bathed in light.
The video also includes a monk being flogged.


However, it has returned to YouTube with an age restriction and Vevo branding.

So far, the video "ban" has been covered by Sky, Yahoo!, The Independent, CBC, The Atlantic, etc., etc.

Most coverage assumes that the religious imagery is the cause of the ban. But I hope not. Showing priests, nuns, bishops and saints as grotesque parodies or sinners is an artistic tradition going back to the middle ages. And Bowie has been a "Leper Messiah" since 1972. You can't say there's not art to this.

YouTube apparently hasn't commented on the issue, but I'll bet it was one of two things:


1) They got so many user complaints that the video was "abuse" that they automatically took it down until it could be reviewed, and/or
2) It was the mostly-exposed breasts being sprayed with stigmata blood (which might explain the age restriction) 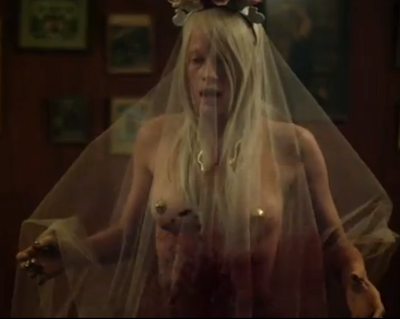 (They have since commented. Via Pitchfork:  Billboard reports that a YouTube spokesperson told them, "With the massive volume of videos on our site, sometimes we make the wrong call. When it's brought to our attention that a video has been removed mistakenly, we act quickly to reinstate it.")

Nonetheless, this is just the latest in what has been one of the most impressive publicity campaigns for a comeback album that I have ever seen. First, David Bowie managed to record the entire album entirely in secret, releasing the first single as a video on the stroke of midnight on his 66th birthday. This generated massive interest for the album, which was not due to come out for two months. He then pre-released his second video single, a song of a very different genre, which seemingly paid homage to an internet meme that he and Tilda Swinton are the same person. The album cover caused gasps in the design world for being just a re-hash of the "Heroes" cover with a white square over the face. And the artist has avoided giving interviews, instead leaving the press access to his band, his producer, and even his wife's Twitter feed.

As a result, his official Facebook page says The Next Day is David Bowie's most popular album since Let's Dance.

And David Bowie is the most interesting and relavant he has been since the Seventies.


Bonus: Flavorwire attempts to deconstruct all the religious imagery