Cross-posted at Sociological Images.
So it turns out there's this company that makes "zombie" targets for gun enthusiasts. They have clown zombies, nazi zombies, "terrorist" zombies, dog zombies and even a green zombie named "Rocky" that has Barack Obama's ears.


The Zombie virus does not discriminate and neither does Zombie Industries.  We take preparation for the Zombie Apocalypse seriously, which is why we strive to have all groups of undead monsters represented in our product selection.  In addition to the Ex Girlfriend Zombie, we currently sell 15 male zombies, 5 animal zombies & 2 aliens… to discriminate against Women by not having them represented in our product selection would be just plain sexist.

Each of the zombie targets has a story. Here is the story of "The Ex":


Be warned, hell hath no fury like a woman scorned but a man scorned is nothing to mess with! A young gent from Louisiana, we’ll call him Andre` to protect his identity, was deeply committed to his one true love and her to him, or so he thought. While partying with her friends during one particular Mardi Gras, she took several suitors over the course of the festivities. Andre` felt something odd indeed, so he paid a visit to his great aunt, Marie, who helped him see the truth. With a few eggs, candles lit and kiss upon his forehead, her voodoo curse was set in motion. Late each night while lying in bed, a smile would appear across his face, for a slight breeze would travel through a cracked window bringing with it, a faint whiff of decay and a unnatural cry of regret.

That's right. In this narrative, a man kills a woman for cheating on him. Then he has her turned into a zombie. Which you, bro, are now invited to blow to bits. 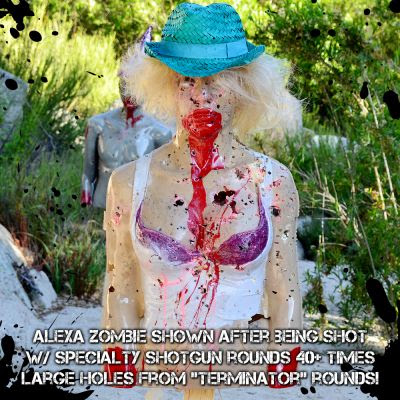 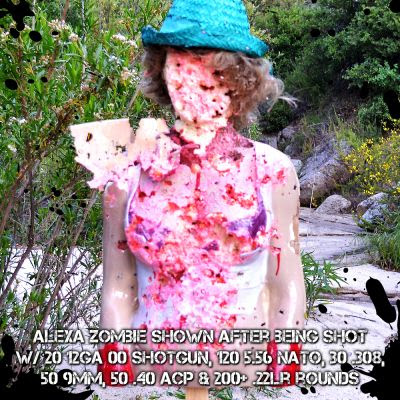 Despite the game-like zombie theme, it is notable that the single human female representation has been created specifically as a target of violent male anger towards a woman's ownership of her own sexuality. 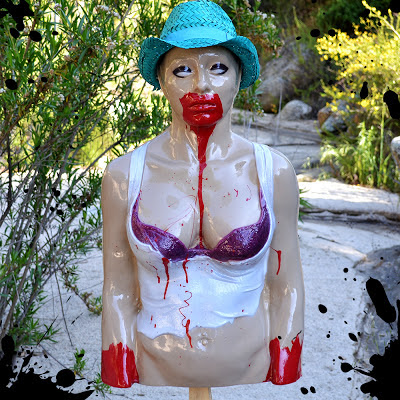 "The Ex" is also portrayed in a highly sexual way, with what seems to be a bare lower torso and busting out chest.

Policymic writes, "Every day, at least three women are killed by an intimate partner in the US alone.  Let's make sure those numbers go down, not up. Let's make sure companies like Zombies Industries know that we're not buying it."

Some people, however, are buying it. And this is what's most troubling.

From the product reviews:

This Zombie Bitch is awesome, reminds me of a girl I knew in High School, My LMT LM308MWS should put a stop to the undead bring them on !!! Later Party till you drop Corvette forever !!!!! - Ralph Cox ( Big Money Grip)

I love that this target looks like Britney Spears and it bleeds when I shot it. - Bryan

It may just be me, but I think that people who are willing to pay $100 to shoot a cheap sex doll to bits while fantasizing about killing women who rejected them (and people who think that's totally cool) have some very serious problems.

Oh, and Zombie Industries was selling this shit at the National Rifle Association convention in Houston last weekend. Surprised?

Update: Amazon was selling The Ex. It is no longer doing so.

Update 2: Kelli, a Sociological Images reader, commented on the cross-post that Zombie Industries has changed the name and backstory of "The Ex" to make her more of a traditional villain:


Alexa was from Louisiana and was always drawn to the occult.  She had a wicked mean streak in her and was known for her nasty disposition, especially if she had been drinking.  She also happened to be in love with a young man, but there was a slight problem.. he was married to another women.  When he told her that he loved his wife and could never be unfaithful to her, Alexa became enraged.  She decided to seek the help of a local tarot card & palm reader who also dabbled in Voodoo.  When she told the Voodoo Witch of her plan to break up a loving a marriage.. the witch refused to help her.  That’s when Alexa lost her cool for the last time and crossed the wrong person.  She let out a slew of insults directed at the witch and told her she would get her way one way or another.  That’s when the Voodoo Witch cast a spell of her own.  Alexa never knew what hit her and before she reached her home that evening she joined the ranks of the Undead!

It's more of an admission of guilt than anything else...
Posted by Tom Megginson at Tuesday, May 07, 2013