Is American Apparel's most explicit thing yet... feminist art?

American Apparel, apparently concerned that its ability to shock people with its sexualized advertising is starting to wane, has once again engaged the world of earned media with an "outrage": 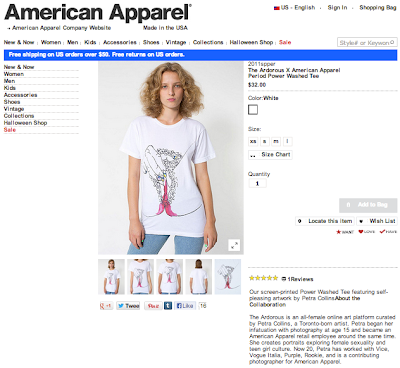 
The Ardorous is an all-female online art platform curated by Petra Collins, a Toronto-born artist. Petra began her infatuation with photography at age 15 and became an American Apparel retail employee around the same time. She creates portraits exploring female sexuality and teen girl culture. Now 20, Petra has worked with Vice, Vogue Italia, Purple, Rookie, and is a contributing photographer for American Apparel.

Compared to American Apparel's sleazily objectifying ads, however, this one seems to have an authentically feminist purpose — at least to the woman who drew it.

Ms. Collins, who is based in Toronto, told Vice that she was trying to challenge taboos about women's bodies:


Menstruation—and also pubic hair—really freaks people out. There’s pubic hair in the drawing, which I guess is super shocking to people, even though I cannot get over that. I feel like I’m so sheltered in a way. I always forget that people are so close-minded.

That's actually pretty cool. It's not the first time AA has done something constructive in their marketing assault on "decency".  So, while I won't be wearing this unisex V-shirt to work anytime soon, I have to give them points for art. Even if they do stand to make a few bucks from it.

UPDATE: The shirt is no longer available at the AA e-store.
Posted by Tom Megginson at Wednesday, October 09, 2013