How far can Justin Trudeau push his female appeal? 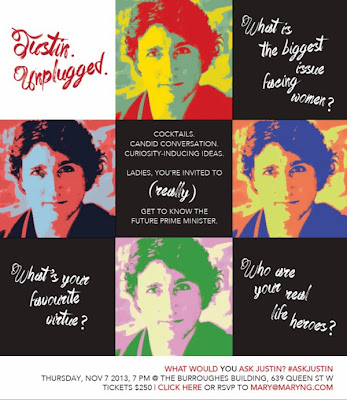 There's no denying Canadian Liberal leader Justin Trudeau's charisma. He's got his dad's name and his mom's looks. He's young. (Well, younger than me, anyway.) And he is riding high in the polls on trendy issues like legalizing pot.

Women, in particular, like Justin. I can still recall a Millennial woman colleague getting all "twitterpated" when he sat behind us on a train to Montreal.

All of these factors make the promotional poster above, from the Liberal site, for a "ladies' event" fundraiser, a no-brainer. But that's kind of the problem.

One part rock star politician, one part "hey girl" meme, this promotion is not subtle about using sex appeal to position Justin as a champion of women's issues. But will it work?

Maybe. But that won't stop me for calling it out on placing style and stereotypes over substance.

Thanks to Kayren M. for the tip.