Teen who posted "Blacks for Sale" ad is "not racist" 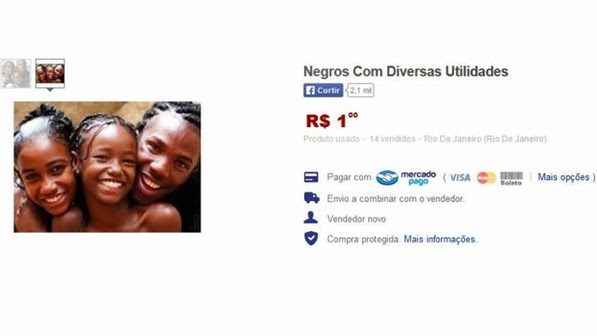 An ad posted on a popular Brazilian online marketplace, offering "Black for diverse uses" for 1 Real (41¢ USD), has been traced to an angry 15-year-old.

According to NDTV, the ad, which was pulled from Mercado Livre after massive online protest, was tracked by police to a teen living in "a northern Rio slum."


Rio police said it had been posted by a 15-year-old who was frustrated because he felt he had been shut out of a computer course by a quota system set up to encourage black students.

Local daily O Dia quoted Police Inspector Gilson Perdigao as saying the boy had been held for questioning for two hours but would not be charged as he had no previous history of racist aggression.

The youth's mother, a 43-year-old teacher, told the paper: "He regrets what he did. My son is not racist and asks black people for forgiveness.

"This was a thoughtless act because he failed the first phase of the exam," she added.

First of all: yes, you're racist. Second, what is a teacher doing living in a "slum"?

In Brazil, this is more than a case of insensitivity. It's criminal.

Veja (Portuguese, translated by Google) cites The National Ombudsman of Racial Equality,
Carlos Alberto Silva Júnior, who explains that Article 20 of Law No. 7.716/1989,  provides for imprisonment from two to five years and fines for people convicted of practicing, inducing or inciting discrimination or prejudice based on race, color, ethnicity, religion or national origin.

Apparently, those who share the offensive material in blogs or social networks with intent to denigrate or discriminate can answer the same crimes. (Yikes!)

NDTV adds that in 2012, Brazil enacted a law that reserves 50% of university placements to students from public schools, with priority given to black, mixed race and indigenous people.

This case is an important reminder of how racism often manifests itself as the anger and frustration of one socioeconomically disadvantaged population against another, who they believe are receiving unfair privilege.