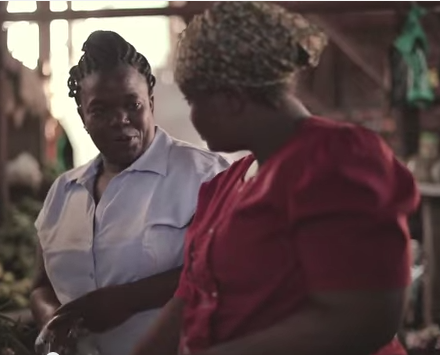 This ad is entirely in Swahili, but if you look up the term "Mpango Wa Kando" you can get the gist of the story: Two women in the market discuss one of them having an affair with a man. The woman tells her friend, the "adultress" that she should use a condom to protect herself and their families from sexually transmitted infections (HIV in particular).

The “Weka Condom Mpangoni” advert which features two women who openly admit something we fight to put under the carpet that yes there are married women with mpango wa Kando.

“One of the ladies inquires about the other’s husband and then immediately seeks to find out how her mpango wa kando is doing. The first lady then goes ahead to explain that even though her husband may be away, that does not mean that she miss out on “fun” since the other guy is readily available to provide it. The second lady then counsels her to always use condom whenever she’s having “fun” with her mpango wa kando”.


The Anglican Church and the Council of Imams and Preachers of Kenya protested the ad, claiming it was promoting promiscuity and infidelity rather than preventing HIV, and Kenya's Ministry of Public Health cancelled the ad's TV broadcast.

Had the clergy not interfered with it, the message would have reached millions of Kenyans and would have benefited even the youth and people already living with HIV.
Whether you are married or not, using condoms in Kenya is challenging for most people as it carries the weight of stigma and many shy from buying them from shops.

Gladys (name changed) a married woman who admits having an extra marital affair tells me that sometimes she and her lover opt to have unprotected sex for fear of stigma in the community if anyone saw them buying condoms. "With or without the advert, thousands of married people have extra marital affairs and the clergy should not bury their heads in the sand. They should team up with the government to promote the prevention campaign," she asserts.

Kenya is the 4th most HIV/AIDS-affected nation in the world, with at least 100,000 new infections in Kenya annually. But heaven forbid we talk about safer sex, even outside of marriage.
Posted by Tom Megginson at Tuesday, February 17, 2015