According to The Irish Times, this video was made to promote the Japanese city of Shibushi, to promote its local eel farmers.


The male narrator... describes how he had vowed to do all he could to nurture her. “I fed her delicious food until she was full, and allowed her to get plenty of sleep,” he says.
Seconds later viewers are treated to a close-up of eel being cooked on a barbecue grill. “We take great care when farming our eels,” says the narrator.

Indeed! The video has since been withdrawn by authorities, but not before it caused an uproar online.

Well-founded accusations of sexism aside, I find it ironic. The concept of anthropomorphizing animals we eat is a common tactic used by PETA: 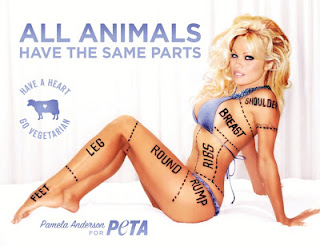 Either way, the image of women as pieces of meat is pretty unpalatable.

Thanks to KP for the tip!
Posted by Tom Megginson at Wednesday, September 28, 2016