Now, first let's put aside that it's an ad for an online betting service. Then let's decide to temporarily overlook the stereotyped South Asian waiter.

Okay, done? Now let's talk about how disabled people are portrayed in this spot.

According to utalkmarketing.com, this ad has been pre-emptively banned from airplay by Clearcast, the UK TV regulator.

"A Clearcast spokesperson said that they were concerned about the 'juvenile behaviour' portrayed in an advert for a betting company and that the advert could be seen as 'offensive' in the way that the men with disabilities were portrayed.

The client, Paddy Power (whose name also makes me go "hmmmm..."), counters: "As a brand, Paddy Power looks to display a fun and irreverent look on life and those ‘ground open up and swallow me’ moments we’ve all experienced are certainly such occasions.”

So we're supposed to be focussed on the waiter, and the fact that he has been "run" out on, rather than the blokes in the wheelchairs. Paddy Power is then able to explain how, by comparison, they are a safe bet because they guarantee payout. 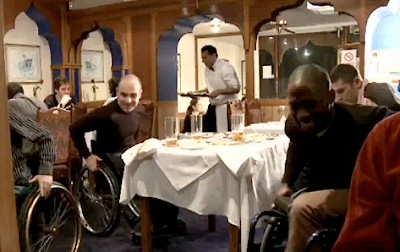 But back to the guys in the wheelchairs. utalkmarketing.com points out that one of them is wearing a Hearts & Balls rugby shirt. It's a UK charity that helps out people disabled by rugby-related injuries, and their families. Why is it in there?

I suspect, and this is just me being optimistic, that there is a tiny seed of desire in this spot that wants to grow into the idea that people in wheelchairs are "just ordinary blokes" who do the things able-bodies rugby yobs might do. It's unfortunately stunted by the comical getaway scene at the doorway. But just imagine if the guys had slipped away in a more subtle manner, then rolled down the street at top speed when they were caught. That would have been progress towards my dream world where people with physical disabilities are seen as people first — even flawed people — and their disabilities are just an afterthought.

Personally, I'm more offended by the portrayal of the waiter. "That's the second time today they've done that!" He might as well have been played by Rowan Atkinson or the late Peter Sellers.

There are two other ads in the series. One is pretty funny, the other one painfully awkward:

What do you think? Do I give these bookies too much credit?
Posted by Tom Megginson at Tuesday, March 09, 2010