I just caught up with an article from last week's Advertising Age that is kind of a big deal for social marketers.

It previews a study by Northwestern University's Kellogg School of Management on the use of shaming in anti-binge-drinking ads — with specific reference to a prom night campaign initiated by the LCBO: 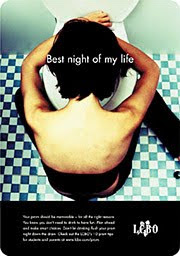 Copy: “Your prom should be memorable – for all the right reasons. You know you don’t need to drink to have fun. Plan ahead and make smart choices. Don’t let drinking flush your prom night down the drain.”

The study interviewed 1,200 undergraduate students at Northwestern, and concluded that the attempt to shame students straight had ironic psychological consequences:

"Viewers already feeling some level of guilt or shame instinctively resist messages that rely on those emotions, and in some cases are more likely to participate in the behavior they're being warned about."

Seems counterintruitive, doesn't it? But it seems this study dredged up a phenomenon psychologists were already well aware of, something called "defensive processing".

I'm only an armchair shrink, but I get this. It has to do with self-esteem. We don't really want to feel badly about ourselves, so when our self-esteem is under attack by a message meant to induce shame, we get defensive. We block it out, we make fun of it, or we even defy it by engaging in even more of the behaviour.

"Findings show such messages are too difficult to process among viewers already experiencing these emotions -- for example, those who already have alcohol-related transgressions.

To cope, they adopt a defensive mindset that allows them to underestimate their susceptibility to the consequences highlighted in the ads; that is, that the consequences happen only to 'other people.' The result is they engage in greater amounts of irresponsible drinking, according to respondents."

This is a great reminder to social marketers about the holier-than-thou approach we are often tempted to take — particularly when we and our client are "true believers" on a social issue. I've always said that the problem with being an activist is that you naturally want to preach to the choir. And this is not what social marketing should aim to do.

As one of the study's authors concludes, there are two things we need to keep in mind:

"The first involves media: Ads placed in more-positive surroundings -- such as in a sitcom or a positive magazine article -- have a better chance at resonating than those placed in tense or negative contexts.

Second... anti-alcohol groups would be better served focusing their messages around how to avoid situations that lead to binge drinking than on the consequences of the behavior, because attempting to shame people out of binge drinking doesn't work."

If you want to read more on this issue, there's another academic article about it here. It's long, but both it and the Kellog study should make good professional development reading for anyone in the biz.
Posted by Tom Megginson at Monday, March 08, 2010