Golshifteh Farahani is an Iranian actress who has appeared in Western movies with Leonardo DiCaprio, Russell Crowe and Isabella Rossellini.

But most recently, she has become known as the latest woman from the Muslim world to be condemned for daring to bare her body for art. 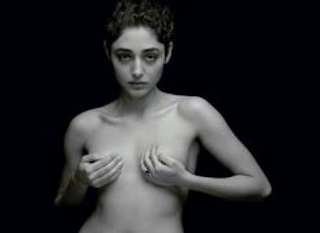 Barely, that is.  She appeared partially nude in Jean-Baptiste Mondino's 'Corps et Âmes' (below) as well as in the French magazine Madame Le Figaro (above).

"The Paris-based actress left Iran last year in protest against restrictive Islamic codes that the Iranian cinema industry has to follow under Ahmadinejad's conservative cultural policies.

Now she said the government has sent a communication telling her not to travel back to her homeland.

"I was told by a Ministry of Culture and Islamic Guide official that Iran does not need any actors or artists. You may offer your artistic services somewhere else", Farahani said."

Following the Nude Photo Revolutionary scandal in Egypt,  I continue to wonder if these individual acts of protest are any indication of a simmering desire for sexual revolution among the women of the conservative Muslim world. If it is, I wish them well.
Posted by Tom Megginson at Sunday, January 22, 2012