David Bowie is 66 years old today. And, after almost a decade of reclusive retirement, he's throwing a surprise party for his fans.

Why am I writing about this on my advertising blog? Bowie has always been a keen self-marketer, and this is no exception. He played the gay angle masterfully to get publicity at a key point in his career, then continued to push music, fashion, media and technology throughout the 70s and early 80s. Then he had a slump, but re-emerged as a more mature and mellow musician comfortable with his past. And he kept doing neat things. I'm a huge fan.

He was an early music video pioneer, because he understood the importance of image in selling late-century pop. He would go on to blow people's minds with an image that threatened to overcome the artist. Many years later,  in 1996, according to his own site he was the first major act to officially release a song via internet download, "Telling Lies". (The new single is available on iTunes.) In 2004, he was on a roll, with a great new album, Reality, and a huge world tour. But then he suddenly succumbed to serious cardiovascular disease, requiring emergency heart surgery. The tour ended, and Bowie went into retirement. He started working on his back catalogue.

If there's one thing David Bowie excels at, it's getting people talking about him while remaining an unpredictable enigma. In 1973, he broke up his best band, the Spiders from Mars, on stage with zero notice (even to its members). The next year, he changed musical styles mid-tour, becoming a disco dude. Then it was on to German-style techno. Until his deliberate commercial sell-out with Let's Dance (and a couple of flaccid follow-ups) nobody knew what to expect next.

Now, he has suddenly emerged from several years of retirement with a brand new album and a song/video teaser. (Watch it here) 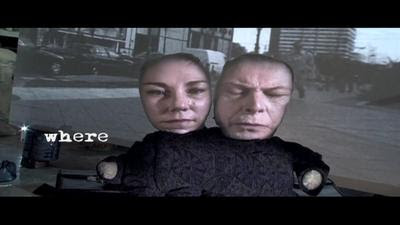 I just finished reading Neil Young's autobiography, and in it he laments how artists have no privacy to develop their ideas without them being leaked to and analyzed on social media. Bowie, who has never been a social presence outside his owned digital channels, somehow managed to record an entire album in absolute secrecy, shoot a video, and simply announce it to the world on his 66th birthday. It's a guarantee that he will dominate mainstream and social media for the day.

I have to admit, the first song is kind of a downer. And Bowie is finally starting to show his age. But the video is as weird-ass as you could hope for. And even the album cover — a minimalist recycle of the "Heroes" art from 1977 — is surprising. It almost looks like a joke. 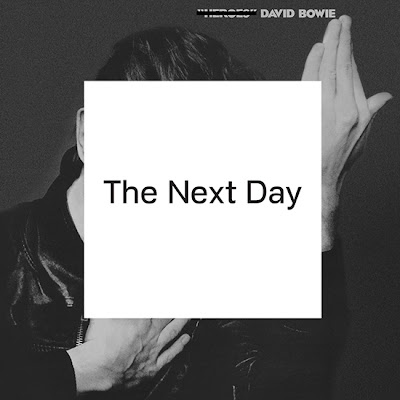 The cover was designed by London graphic design studio Barnbrook. In his blog, Jonathan Barnbrook addresses its weirdness:


...we know it is only an album cover with a white square on it but often in design it can be a long journey to get at something quite simple which works and that simplicity can work on many levels – often the most simple ideas can be the most radical. We understand that many would have preferred a nice new picture of Bowie but we believed that would be far less interesting and not acknowledge many of the things we have tried to discuss by doing this design. Finally we would like to give David Bowie great credit, he simply did what he always does which is to go with a radical idea and that takes courage and intelligence. That is why we love his music and love working for him.

Although I'm not surprised Bowie has no plans to tour, I'm disappointed. The last time we saw him live, in 2004, my son was in the early stages of forming in his mom's womb. Now he's a fan, too. But this is David Bowie's show. We're just along for the ride.