Marketing deadly guns to kids? It's no joke. 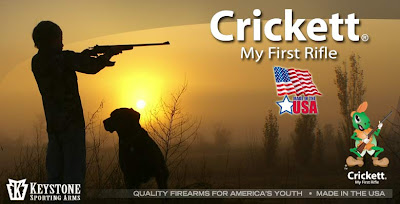 This ad feels like satire, but it is not:

That's right, rifles for little kids. In a gun-loving culture, I'm sure there are arguments for teaching "gun safety" to children as soon as possible.

But that wasn't the case for an unnamed 5-year-old boy in Cumberland County, Kentucky. He accidentally shot and killed his 2-year-old sister while playing with his .22 calibre "My First Rifle" that had been left loaded and accessible in the house:

[Cumberland County Coroner Gary White] said the children's mother was at home when the shooting occurred, and the gun was a gift the boy received last year.

White said the gun was kept in a corner, and the family did not realize a shell had been left in it.

He said the shooting will be ruled accidental.

"Just one of those crazy accidents," White said.

As a parent myself, I empathize deeply with the family who lost a little girl. But this was no "crazy accident". This company encourages really young children not just to learn how to use a gun, but also to see it as a fun, destructive, and lethal plaything.


I understand hunting. I understand the sport of shooting. I just don't think marketing guns to children as if they are toys is right.

Of course the company talks about responsibility. Their kids' guns have safety locks, and they sell books that are supposed to be about responsible gun use. 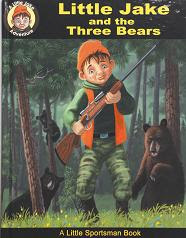 Here's a description of "Little Jake and the Three Bears":

In that one, one of the bears does not come out of the hunt well, but his skin keeps Little Jake toasty through the next winter, and the little fella feasts on bear sausages while hunkered down under the rug.

But it's not all chest-beating and swagger. After Little Jake bags the bruin, he spends a contemplative moment thinking of what his warm rug has cost the bear, and thanks the animal for his sacrifice. He does a similar thing after he kills the King of the Forest, Bambi's father.

"It's all about casting hunting in a positive light," Jacobs said. "Kids today are only hearing one side. Hunting and firearms are part of our American tradition. All it will take is for the hunting tradition to skip one generation, and I'm afraid that will be it. We will lose it."


However, if you head on over to the company's YouTube channel, they have favourited a video featuring an 11-year-old girl who "defends her home from three armed burglars" using one of their products. Somehow, she survived. Giving kids and parents the false hope that arming their children will keep them safe is hardly responsible gun stewardship.

The other problem with the marketing is that, no matter how much companies like this and the NRA talk about responsibility, the American Journal of Public Health reported that unsafe storage of firearms in American homes with children is a serious problem:

Fortunately, according to the Centres for Disease Control (via CNN) deaths like the one in Kentucky are statistically rare:

Of course, that's still 703 dead kids as a result of playing with guns.

As an urban, left wing Canadian, it's hard for me to understand the American obsession with guns. I am also aware that this is a very serious cultural divide. I'm just now reading the book The Better Angels of Our Nature: Why Violence Has Declined by fellow Canadian Steven Pinker, and he takes a Hobbesian view of the matter. While Western Europe and many English colonies (like Canada), he observes, had strong law-and-order states before they had democracy, the United States gave (some) citizens the vote when much of the land was still in a state of armed uprising.

In Canada's mild west, the cliché goes, the law arrived before the settlers did. Acceptance of state authority to resolve conflicts among citizens is part of the culture here, as it is in much of Europe, and democracy was eventually granted with relatively little bloodshed. In the States, where democracy was taken by force by the citizens, guns are seen by many as essential to freedom and liberty.

That said, I don't personally want the liberty to arm my 8-year-old son with his very own unlocked, loaded, and unsupervised .22 calibre rifle and fill his head with dreams of vigilante justice.