You've probably heard the news that David Duke, former "Grand Wizard" of the racist KKK, is running for United States Senate. He's promising to "defend the rights of European Americans." 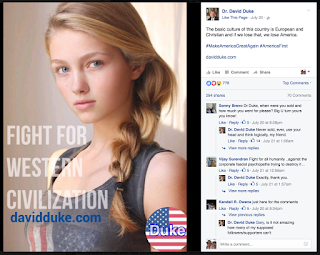 One of the many meme-ish campaign posters he's sharing on social media is this one, which Lisa Wade of Sociological Images pointed out looks rather... ummm...


David Duke is running for senate. The campaign poster on the left is his. #DavidDuke #AmericaFirst #shudder pic.twitter.com/XjGPViDut0
— Lisa Wade, PhD (@lisawade) July 23, 2016


Aside from that, the photo appears to have been stolen from the portfolio of Dutch model Romy van de Laar. Signed to Elite Model Management, Ms. van de Laar was photographed in this shot in 2012 or before, as far as I can tell from the many fashion blogs (and creepy tumblrs) the shot appears in. Now 20, she must have been 15 or 16 at the time.

Tweeter @joshuacomer also tracked down the model's identity through a reverse image search, and says he has reported the presumably-unauthorized use to Elite.

So to summarize: David Duke, a venomously racist white nationalist, is running for high office in the United States. I suppose stealing a picture of a teenage girl to further his evil agenda isn't the worst thing he's ever done, but it's pretty despicable.

Oh yeah, and Donald Trump seems to like him.