American Atheist ads fight one myth with another 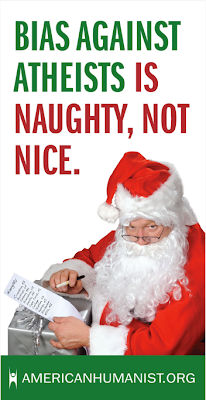 The odd assortment of target markets is based on AH's list of places where self-identified atheists have experienced discrimination in their communities.

Here's the example from Cranston:

Jessica Ahlquist, a student at Cranston High School West, filed a federal lawsuit asking that a prayer banner be removed from the public school. The banner, which violates the First and Fourteenth amendments of the U.S. Constitution, includes the phrases “Our Heavenly Father” and “Amen.” Local authorities are asking that the banner remain.

According to a story in The Providence Journal, “students and adults have called [Ahlquist] a ‘stupid atheist,’ an ACLU tool, a witch and a ‘media whore.’ They’ve also threatened her through e-mails or at school, she says. A former classmate told her that, if she knew what he really thought of her, she would kill herself, she says.”

These bullying incidents, by peers and institutions, shouldn't be tolerated in any case. The implication is that in very "Christian" areas of the US, Atheist-bashing is tolerated by the public.

But is this any way to address the issue? I don't think so. Because various atheist causes have been running anti-belief campaigns like the one below, they continue to brand themselves as "anti-God" instead of just free-thinkers. While the message that there are other atheists out there is not specifically anti-religion, it will be taken as such by the very people who hate them. And so on. And so on. It's a very American "us versus them" approach. 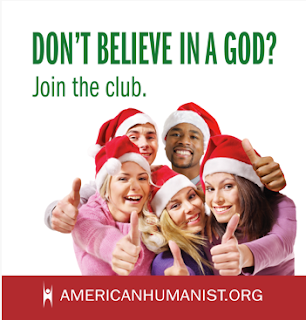 My solution? Lose the whole "atheism" label. It makes the lack of religion sound like a religion itself. If you want to get through to people, don't attack a deeply-entrenched belief that they have not come upon through rational discovery. You cannot argue them out of it.

You need to show them that you are really so "good without God" that you feel no need for comparison. Just be the individual thinker who you say you are. Lead by example in showing the true Christian values of compassion, humility and charity — as opposed to the false Christian vices of xenophobia, pride and social coercion.
Posted by Tom Megginson at Wednesday, November 23, 2011