Well-versed in bringing women of extraordinary beauty to the forefront of mainstream popular culture, Mazzucco searched the globe for the world's most stunning women to appear in the book. The result is a 248 page collection of color photographs and art pieces showcasing a diverse group of women—some already legendary, some about to become so—who embody the spirit of culo and the start of a new era of beauty.

American Photo hailed Raphael Mazzucco as "one of the top 50 photographers in the world to watch." Renowned for his images of some of the most exceptional women in the world, his work graces billboards and magazine covers and fills coffee table books for clients as diverse as Ralph Lauren, Bergdorf Goodman, Victoria's Secret, Sports Illustrated Swimsuit, Guess and L'Oreal. Raphael continues to define the look of popular culture and create iconic pop culture imagery, shooting portraiture for notable actors such as Adrien Brody, Benicio Del Toro, Matt Damon, Susan Sarandon, and Rachel Weisz, as well as Marisa Miller's 2007 Sports Illustrated Swimsuit Issue photo sensation, in which she was 'wearing' only an iPod.
Raphael's arrival onto the art scene was met with critical acclaim during a two-year international tour of exhibitions in which his work was shown in Milan, Florence, Melbourne, Los Angeles and New York.

Jimmy Iovine, acclaimed music executive and record producer, is Chairman of Interscope Geffen A&M Records, a unit of Universal Music Group, the global music leader. Interscope, the label Iovine co-founded, is celebrating its 20th Anniversary with continued commitment to its diverse and gifted artists including Eminem, Lady Gaga, Dr. Dre, U2, The Black Eyed Peas, Mary J. Blige and No Doubt- to name just a few. Iovine also heads up Beats by Dr. Dre, the enormously successful high-performance headphone and sound transmission company he co-founded with legendary artist and fellow producer, Dr. Dre, in January of 2008. In conjunction with Interscope's deal with American Idol, Iovine joined the show as mentor to the contestants in the 2011 season. Iovine began his career in the mid-70s as first a recording engineer (John Lennon, Bruce Springsteen) and then a producer (U2, Dire Straits, Stevie Nicks, Tom Petty & The Heartbreakers, Patti Smith) before starting Interscope Records in 1990. He co-produced the hit Eminem movie "8 Mile" as well as "Get Rich or Die Tryin;" starring 50 Cent and directed by Jim Sheridan and he executive produced the critically acclaimed LeBron James documentary "More Than A Game."

That sure is a lot of explanation for a book about asses. 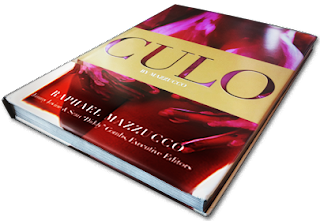 Happy weekend, everyone.
Posted by Tom Megginson at Friday, November 25, 2011