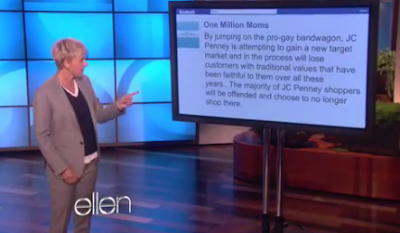 From One Million Moms:

Recently JC Penney announced that comedian Ellen Degeneres will be the company's new spokesperson. Funny that JC Penney thinks hiring an open homosexual spokesperson will help their business when most of their customers are traditional families. More sales will be lost than gained unless they replace their spokesperson quickly. Unless JC Penney decides to be neutral in the culture war then their brand transformation will be unsuccessful.

Their marketing strategy is to help families shop and receive a good value for their money. Degeneres is not a true representation of the type of families that shop at their store. The majority of JC Penney shoppers will be offended and choose to no longer shop there. The small percentage of customers they are attempting to satisfy will not offset their loss in sales.
JC Penney has made a poor decision and must correct their mistake fast to retain loyal customers and not turn away potential new, conservative shoppers with the company's new vision.

"Importantly, we share the same fundamental values as Ellen," said Michael Francis, president of J.C. Penney Company in a press statement. "At JC Penney, we couldn't think of a better partner to help us put the fun back into the retail experience. Moving forward, we'll be focused on being in sync with the rhythm of our customers' lives and operating in a 'Fair and Square' manner that is rooted in integrity, simplicity and respect. We're thrilled that she's joining our team to help convey the exciting transformation under way."

"They have an incredible vision for the future and are completely re-inventing themselves to become America's favorite store," said DeGeneres in a press statement.

By jumping on the pro-gay bandwagon, JC Penney is attempting to gain a new target market and in the process will lose customers with traditional values that have been faithful to them over all these years.

"Neutral"? Hilarious! Neutrality would mean accepting that sexual orientation has nothing to do with the issue.
But I love the way OMM quote JC Penney and DeGeneres as if we're supposed to be outraged. JC Penney has made an excellent move in striking up a partnership with a celebrity who gay and straight people alike love for her humour and intellect.
According to Reuters:


"DeGeneres' daytime talk show has more viewers than the American Family Association has moms. Between January 16 and January 22, "Ellen" averaged 3.38 million viewers -- or 2.38 million more people than the AFA has moms."

And then she totally owned them with this statement:

Give it up, one million morons. Your relevance has passed.
Posted by Tom Megginson at Wednesday, February 08, 2012