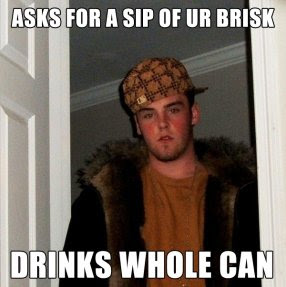 I miss the days when "meme" was a scientific term (coined by Richard Dawkins). But now it's so bastardized that most young 'uns thing it's what you call those captioned photos that are generated by morons and spread virally by their friends.

Scumbag Steve is one of the classics of the genre, based on a 6-year-old MySpace photo of a guy who calls himself Blake Boston. The whole idea behind it is to match his douchey expression with some dick move you'd expect from him.

According to fastcocreate.com's Joe Berkowitz, the version you see at the top of this post was actually seeded by Mekanism on popular image sharing site imgur in what must be the laziest "advertising" placement of all time.


The ad is Imgur’s first step in a new Promoted Image ad unit. It will be featured in the site’s image gallery, alongside similar pieces of content. Users will be scrolling through images of the next Sad Keanu or Schrute Facts, and eventually encounter the Brisk version of the Scumbag Steve meme in an elevated profile. The next phase of the ads will require a more curatorial role for Mekanism, though.

I just have two questions: