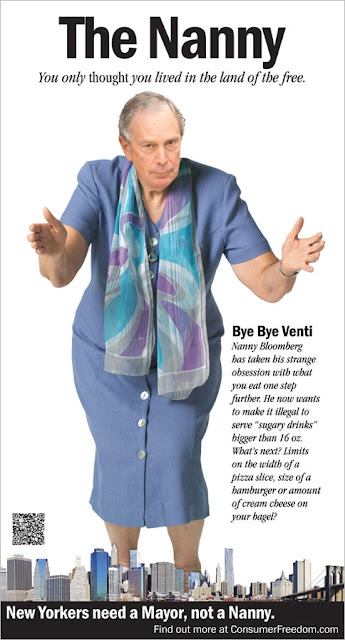 AdFreak shared this horror-show depiction of NYC Mayor Michael Bloomberg in a matronly dress. He's a "nanny", you see. Get it? "Nanny state". All unAmerican and unmanly-like.

Mayor Bloomberg recently announced a plan to ban the sale of any cup or bottle of sweetened drink larger than 16 fluid ounces. That's an American pint, about 475 ml.

This plan is an attempt to fight the obesity epidemic, of which New Yorkers are some of the least contributors. Yet, the super-sized trend really is out of control. When I was my son's age, the small glass bottles of pop I got to buy with my allowance were 10 ounces. McDonald's soft drinks were even smaller (especially considering they were mostly ice). Now, the average Canadian consumes almost 120 litres of soft drinks per year, and our American cousins a whopping 216!

Something has clearly gone out of control. For one thing, pop is relatively cheaper, I guess because most of it is sweetened with heavy-subsidized corn. And consumer demand and portion sizes have been increasing in lockstep since the '80s. But is regulation the answer?

It's part of it. Not that it can stop people from over-indulging in sugary drinks. More because controversial legislation like this forces people to think about the issue.

And that's why this anti-ban ad is interesting. It's not really about people's freedom to drink themselves diabetic on Big Gulps. Can you guess who these brave defenders of consumer freedom really are?


Consumer Freedom formed in 1995 with the financial backing of Philip Morris. Besides lobbying against municipal smoking bans in restaurants, it fights government efforts to restrict food and beverage choices.

That's right, brought to you by the people against smoking bans. You know, the bans that actually work.

You may be opposed to the exxxtra large pop ban for your own beliefs about personal liberty, about the role of the state in a free market, or even about the efficacy or enforceability of such a law. Those are fair points. But when big tobacco is putting money behind a campaign, you can bet it's because business interests — as opposed to public interest — are what's at stake. Because the more politicians regulate harmful consumer overindulgences, the less of a future they have. According to Wikipedia, other "Consumer Freedom" supporters include Brinker International (Chili's), RTM Restaurant Group (the owner of Arby's), Tyson Foods, HMSHost Corp (owners of airport and service station restaurants), and Wendy's.

Did I mention that, unlike hamburgers and other entrees that have super-thin profit margins, super-sized beverages make fast food restaurants tons of extra profit? (Knowing this, when I used to eat fast food regularly, I made a habit of just getting the burger. It not only kept me a little healthier, but also felt good to screw with the business model.)

We all do things we know are bad for us. But in my opinion, Mayor Bloomberg's ban is not as much social engineering as social marketing. It gets all of us (not just New Yorkers) talking about why portion sizes are so out of control. It makes us aware that we're being used. And with awareness comes change. Slowly, perhaps. But it can happen.

And that, I believe, is how Mayor Bloomberg rolls. He started a WHO-sponsored breastfeeding initiative, to try to get formula samples out of hospitals. He is on record saying “governments at all levels must make healthy solutions the default social option." And he went after secondhand smoke.

He is a nanny. But he's a democratically-elected one. And the changes he is starting will probably stick, once people get used to them.

Speaking of change, I'd really love it if advertisers and public figures — especially ones representing major consumer brands — would stop using femininity as an insult to men.

I have a message for Consumer Freedom from Iggy Pop: