It started small, in an interview Dan Cathy, President and CEO of American fast food chain Chick-fil-A, had with The Biblical Recorder on July 2nd.

“We operate as a family business ... our restaurants are typically led by families – some are single. We want to do anything we possibly can to strengthen families. We are very much committed to that,” Cathy emphasized.

“We intend to stay the course. We know that it might not be popular with everyone, but thank the Lord, we live in a country where we can share our values and operate on biblical principles.”

Many national brands have found themselves entangled in the American struggle over equal marital rights for homosexual people, but the the ones who make most of the headlines — such as JC Penney, Kraft and even Archie Comics — have come out (as it were) on the other side.

It may be an indication that this chapter of the evolution of human rights in the US has reached and passed the tipping point of public opinion. But those who are against this change are also ramping up the rhetoric. Which is perhaps why Dan Cathy, whose business has always been openly guided by conservative Christian principles, decided to speak out (as well as donating millions to anti- same sex marriage organizations).

But the current political climate is a tinderbox, and Mr. Cathy was playing with fire. He fanned the flames on a Christian radio show, adding:


“I think we are inviting God’s judgment on our nation when we shake our fist at Him and say, ‘We know better than you as to what constitutes a marriage.’ And I pray God’s mercy on our generation that has such a prideful, arrogant attitude to think that we have the audacity to define what marriage is about.”

It took a couple of weeks for the quotes to filter through to mainstream online media, but they did. And they made people really, really angry.

Here's what Gawker's Cord Jefferson had to say:


From now on, don't fucking eat at Chick-fil-A if you are a person who believes gays are equal to you and deserving of equal treatment under the law. No equivocating and no buying back karma with pity donations to gay-rights groups. Simply avoid the chain for as long as it upholds its homophobic ties. Full stop

Chick-fil-A soon lost a corporate partner in the mix, as the Jim Henson Company issued this statement:


The Jim Henson Company has celebrated and embraced diversity and inclusiveness for over fifty years and we have notified Chick-Fil-A that we do not wish to partner with them on any future endeavors. Lisa Henson, our CEO is personally a strong supporter of gay marriage and has directed us to donate the payment we received from Chick-Fil-A to GLAAD.

And then it got weird. 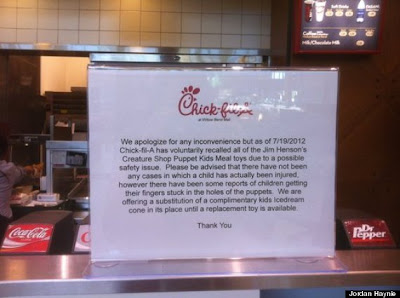 And when protestors inundated Chick-fil-A's Facebook page to call them out on the obviously vindictive (and possibly fraudulent) move, a mysterious astroturfer appeared to defend them before getting busted. 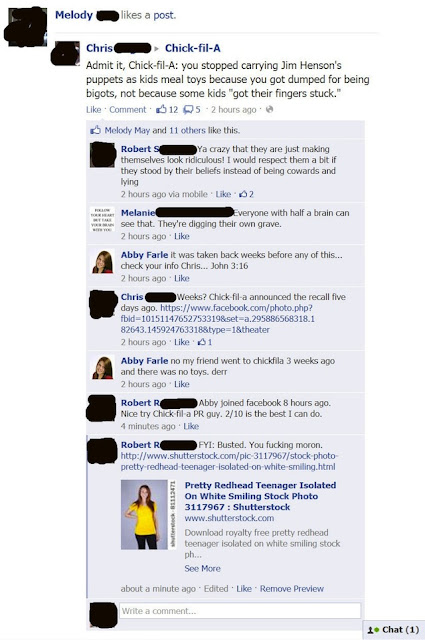 That's right, "she" was a stock photo.

There has been more fallout. The Mayor of Boston, Thomas M. Menino, refuses to let a Chick-fil-A open in his city, writing:

You called supporters of gay marriage "prideful.'' Here in Boston, to borrow your own words, we are "guilty as charged.'' We are indeed full of pride for our support of same sex marriage and our work to expand freedom to all people. We are proud that our state and our city have led the way for the country on equal marriage rights.

I was angry to learn on the heels of your prejudiced statements about your search for a site to locate in Boston. There is no place for discrimination on Boston's Freedom Trail and no place for your company alongside it. When Massachusetts became the first state in the country to recognize equal marriage rights, I personally stood on City Hall Plaza to greet same sex couples coming here to be married. It would be an insult to them and to our city's long history of expanding freedom to have a Chick-fil-A across the street from that spot.

Students nation-wide are also organizing to kick the chain out of their school food courts.

Meanwhile, Republicans Rick Santorum and Mike Huckabee are working on a counter-protest:


“No signs and no protests are needed to make your voice heard.  Just simply have a meal at Chick-fil-A on August 1 for ‘Chick-fil-A Appreciation Day’ and our support for traditional values will be heard loud and clear,” Rick Santorum wrote in an email Wednesday to supporters.


And so the American culture wars continue to express themselves through wanton consumerism. 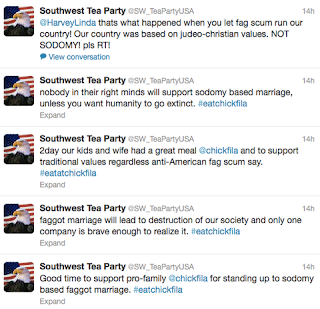 Umm... would you like that Spicy Chicken Sandwich with extra Santorum?