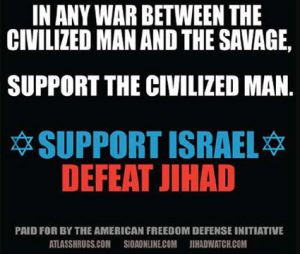 The above ad, according to Mother Jones, was placed on San Francisco Municipal Transportation Agency (Muni) properties by anti-Muslim activist Pamela Geller.

Muni felt they had to accept the ad, based on what they (and legal precedent) perceived as Ms. Geller's First Amendment rights.

So they used their adjacent ad space to run a disclaimer: 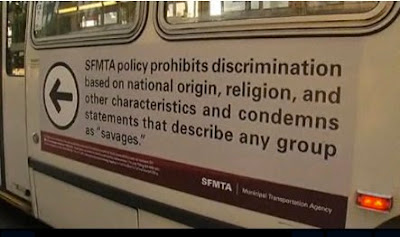 Apparently, Ms. Geller insists that the Ayn Rand-inspired quote in her ads refers to particular acts taken by Palestinian groups during the Israeli-Palestinian conflict. But that's not the Randian context of the copy.

Further, why are the Arabs against Israel? (This is the main reason I support Israel.) The Arabs are one of the least developed cultures. They are typically nomads. Their culture is primitive, and they resent Israel because it's the sole beachhead of modern science and civilization on their continent. When you have civilized men fighting savages, you support the civilized men, no matter who they are. Israel is a mixed economy inclined toward socialism. But when it comes to the power of the mind—the development of industry in that wasted desert continent—versus savages who don't want to use their minds, then if one cares about the future of civilization, don't wait for the government to do something. Give whatever you can. This is the first time I've contributed to a public cause: helping Israel in an emergency.

Dehumanizing your enemy — now who's the "savage"?
Posted by Tom Megginson at Tuesday, August 21, 2012