Last week, I saw an interesting post on Burger Business, a fast food industry blog about how the word "premium" has become a popular adjective for burger chains:


According to data compiled for BurgerBusiness.com by Mintel, its use on menus has doubled since 2007 (and this is even before Burger King’s new items), and not just at quick-service restaurants. In an economy where consumers are looking for top value without necessarily paying more for it, “premium” connotes high quality or high price without committing to being either. “Premium” sounds upscale, special, with a sophistication that “deluxe” lacks.

But what exactly does "premium" mean, in the realm of junk food?

The Oxford American English Dictionary defines the adjective as "relating to or denoting a commodity or product of superior quality and therefore a higher price."

The problem, of course, is that "premium" is not part of the USDA's grading standard. It's an entirely relative term. If the fast food chains are being honest, it could imply that the meat is better than what they were giving you before.

But this is marketing. What they really want to imply is "better than the other guy's."


It's total bullshit, of course. The word is absolutely meaningless in any real sense of food quality. But as a marketing term, it works. Hard.


Speaking at last week’s 2012 Protein Innovation Summit hosted by Meatingplace magazine, Technomic Executive Vice President Darren Tristano presented data on consumer attitudes to beef quality (not just burgers). According to Technomic’s 2011 Center of the Plate Beef & Pork Consumer Trend Report, 28% of diners say the amorphous descriptor “premium” would make them more willing to pay up to 5% more for beef at a restaurant or supermarket. Another 11% say that seeing that word would make them willing to pay more than 5% more.

Technomic’s findings come as many of the growing “better burger” chains strive to set themselves apart by promoting the high quality of the beef they use. Elevation Burger, for example, touts its use of “100% organic, grass-fed, free-range beef.” The Cheeburger Cheeburger chain adopted all-natural, additive-free Angus beef. Farm Burger in the Atlanta area proudly serves grass-fed beef free of antibiotics and hormones. These terms signal quality, certainly, but consumers like “premium” even better.


There's even a chart:

Note that the three descriptors below "premium" are specific and falsifiable. But people are much more likely to pay "slightly more" (and almost as likely to pay ("significantly more") for an adjective that costs the fast food chains absolutely nothing.

Here's how those same consumers describe their expectations of what "premium" beef implies: 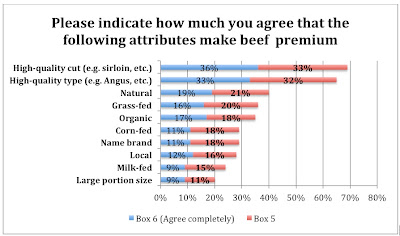 Note that the top two responses have nothing to do with the way the meat was raised or processed, but only the cut and breed. Specifics about hormones and antibiotics don't even make the chart.

If the chains were to move towards hormone- and antibiotic-free meats, they'd greatly increase their costs. If you were them, after attending this "Protein Innovation Summit," which way would you go? (Burger business recommends "premium, 100% Angus sirloin."

Which leads me to the conclusion that the problems with the industrial meat system will be with us until consumers are better educated.