"My Vagina, My Rules" poster is too cool for school 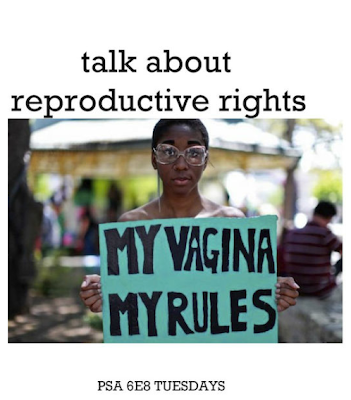 This may be The Year of the Vagina throughout much of the United States, but not at Brooklyn Technical High School.

Animal New York reports that the poster (above), advertising the school’s Progressive Student Awareness club, was swiftly banned after being posted around campus.

Student Brianna Payne was shocked by the censorship, since she had had the posters pre-approved by her teacher, Joseph Kaelin. “He told me that the principal and a couple of the assistant principals saw the posters and they were like, ‘We don’t like them. They’re inappropriate,’” Payne told Animal NY's Andy Cush. “He told me that he agreed with us, and he thought what we were doing was correct, but he couldn’t do anything about it.”

Laura Marquez, Brooklyn Tech's Assistant Principal of Parent and Student Engagement, claims the poster was sensationalist and lacking in useful information. “The poster was passed around to a room of about a dozen administrators, and no person said, ‘Well, you know, lets give them a shot,’" she explained. "Everybody was shaking their heads, or various degrees of annoyed and offended.”

Because "vagina" is a dirty, dirty word. Especially in the context of sexual rights. I can't believe we trust teenage girls to go running around with those things between their legs. Won't someone PLEASE think about the children?
Posted by Tom Megginson at Thursday, October 18, 2012