It was probably a plant (although Richard's profile is pretty established) but who cares? Truly funny sarcasm trolling has become a popular sport online, and posts like this do occasionally show up.

In this case, I don't really care about the authenticity of the setup. It's Bodyform's response that rules:

It's funny, it's truthful, and it even squeezes in (or rather, "out") a fart joke.

Oh yeah, and she drinks the "blue water": 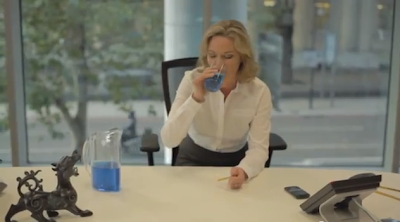 Sure, it makes men look kind of dumb in a tropey kind of way. (And they missed a golden chance to make those guys actually look like they were from the '80s.) But of all the efforts that have been made to break out of the advertising clichés around feminine hygiene, this is by far my favourite.

Tip via The Drum
Posted by Tom Megginson at Tuesday, October 16, 2012