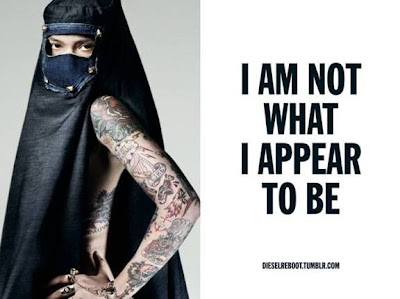 Diesel is certainly no stranger to controversy. So I doubt they're too worried about pissing off people outside of their target audience.

Nonetheless, piss them off they have:


It has always baffled me why the burka, niqab, or either veils are depicted as symbols of oppressive patriarchy in mainstream media, but when they are taken out of their religious context and appropriated like this they suddenly become “creative”, “bold”, and “edgy”. I read one comment describing this campaign as “fashionista meets terrorista.” This is monumentally fucked up.

That's the opinion of Hung Tran, a fashion blogger in Australia. It's shared by Daily Life's Candice Chung, who wrote:


Good one, Formichetti! Never has anyone ever captured cultural appropriation AND sexual objectification so succinctly with a patchy denim headscarf!

Huffington Post bravely trolled Twitter for opinions on the image, part of Diesel's semi-crowdsourced #dieselreboot campaign, and they mostly came up negative.

But how bad is the image in terms of religious/cultural appropriation?

Christian symbols have been appropriated by fashion for decades. But then again, most of those designers come from Christian-dominated cultures. They're basically recycling their own culture.

It's when you play with the sacred symbols of other people's cultures that things get more rocky. Like when John Galliano stepped out with Hassidic curls. (American Apparel was smart enough to use an actual Hassidic model.) Or when Selena Gomez performed with a Hindu bindi on her forehead.

This kind of thing has been going on for a long time. Secular cultures see religious symbols as style, rather than substance, so borrowing elements of them for exotic fashion statements is old hat.

Well, it is free to do so. But people are also free to dislike it. The real question, for marketers, is if upsetting lots of people on purpose is good business or not. Especially when you're selling style.

Kenneth Cole says that it is, and that his insensitive Twitter strategy is helping his brand. I suspect Diesel feels the same way. Women who wear niqabs and burqas, and those who love them, are clearly not a consideration for a brand that recently promoted itself thusly:

Diesel wants to offend. It gets them noticed. And we play along by getting upset and telling everyone about it.

Yes, the topless denim niqab ad is cultural appropriation. It's also heavily sexualized. But until consumers — especially young ones — are ready to drop edgy brands over their marketing behaviour, we can expect to see much more of this in the future. Not despite the complaints, but because of them.
Posted by Tom Megginson at Tuesday, September 17, 2013