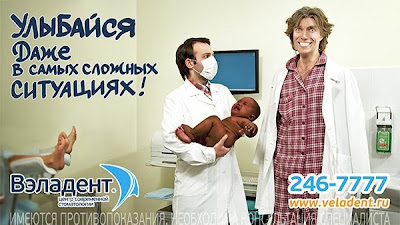 The ad above says (according to Google Translate) "Keep smiling, even in the most difficult situations!"

Did someone complain that this ancient, dumb, joke is rather racist? No.

Business Insider reports that Russia's Federal Anti-monopoly Service fined the advertiser 100,000 rubles (~$3077 USD) After conducting a poll finding that 38% of Russian citizens were offended by the ad.


"The appearance of a typical Russian family of the child with the same skin color as that of the parents, is the accepted norm, and the appearance of light-skinned African-American parents of the child points to marital infidelity on the part of the mother." [This is a quote from the FAS]

According to the regulator, adultery is abusive behavior, disrupts family foundations in terms of morality and ethics. Advertise casts doubt on family values, is ironic, disregard for the norms of public morality. "The scope of medical services is quite serious, and a similar irony in the advertisement is inappropriate."

That's right, Russian regulators. It's not offensive because it recycles a cliché based on white men's sexual insecurities with perceived black sexual prowess. It's offensive to "family values"...