The most honest ad you may read today 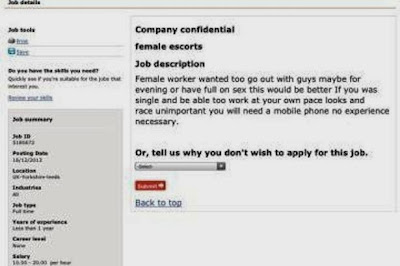 It's a job posting for "female escorts" that appeared on a Malaysian government job site managed by the Department of Works and Pensions, according to the Chronicle.

The Copywriter may not be great at English, but he or she is pretty clear about the job requirements: "go out with guys maybe for an evening or have full on sex."

Prostitution is not technically illegal in Malaysia, but soliciting sex is. After automatically posting, the ad was deemed "inappropriate" by government authorities, and promptly removed from the site.

A man speaking for the advertised company told press, "I put the advert up there because it’s a job site and it’s a job. I was a bit shocked they allowed it."

According to this source, Malaysia has one of the world's highest percentages of sex-workers, with 52 people per 10,000 in the trade. Many are trafficked foreigners, however, and the United States "Trafficking in Persons" program has the country on a watch list for human rights violations.