Is this the most dangerous ad of all time? 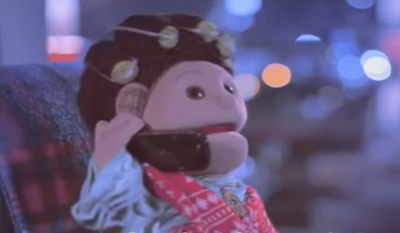 We complain quite often about ads that reinforce stereotypes, sexually objectify people, and promote bad lifestyle choices. But if a conspiracy-minded blogger is to be believed, this Vodaphone ad from Egypt may be at a completely different plane of evil:


Fahita and her daughter Karkoura search for her deceased husband's sim card, while explaining to her friend over the phone about another character "Mama Touta." In the background, a radio anchor explains how to make "stuffed turkey'' for Christmas while sitting next to a cactus from which ball ornaments were dangling.

She said she asked the building guards to get a sniffer dog of a shopping mall to search for missing things and gets money in return.

Weird idea for an ad anyway,  but it gets weirder.

A pro-Mubarak, blogger, Ahmed “Spider," reported to Egypt's prosecutor general that the ad contained a coded message from the Muslim Brotherhood, including details of an upcoming terror attack at an unspecified shopping mall:

Spider explained the alleged code on the Al-Tahrir network on Tuesday night: the mall and the dog refer to the planned site of the attack, and "Mama Touta" is the Brotherhood's secret name.

"The dog, garage, guard, mall and next to us these are elements tell us that there will be a big mall and an explosion after a dog fails to find the bomb in a car," Spider said.

His lawyer told another TV network, el-Faraeen, that an ornament on the cactus refers to the bomb. The cactus has four branches referring to Muslim Brotherhood group's Rabaah sign, commemorating the victims of a deadly crackdown on a protest camp held next to Rabaah el-Adawiya mosque in eastern Cairo. Rabaah is Arabic for "fourth" and is also a name.


Vodaphone described the accusations as "irrational," telling the Associated Press, "The advertisement carries no other meaning and any other interpretation other than that is mere imagination or personal opinion of some of the audience."

Prosecutors are investigating the allegations. This could get interesting, or it could be nothing. But at least 2014 is starting with some interesting advertising news.