What happens when white people are the ones being stereotyped? 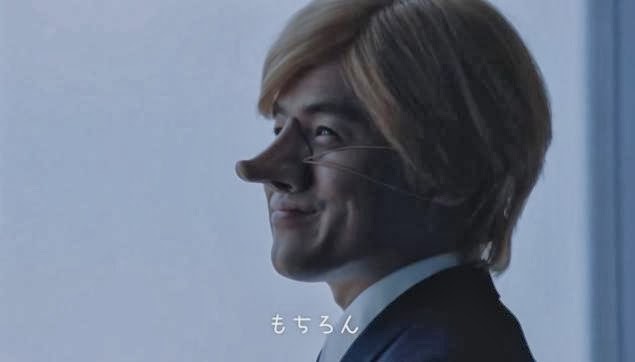 The answer, apparently, is to "westernize" the brand by adopting Euro-American displays of physical affection and donning "whiteface" — in the form of a blond wig and an elongated artificial nose:

According to the Japan Times, the ad caused a flurry of social media outrage among English-language viewers in Japan.

If you are a foreigner and have planned to come to #Japan do not chose an openly racist airline like #ANA ! Watch their Japanese commercial!
— Sibylle Ito (@sibylleito) January 20, 2014


The airline has apparently semi-apologized for the offence, and plans to re-edit the ad:


ANA spokesman Ryosei Nomura said the carrier wanted to express the importance of the upcoming international flights at Haneda and to urge Japanese to go out and see the world.

“But we have received opinions different from the message that we wished to convey. We will modify part of the advertisement and will release the second version soon,” he said.

While stereotyping is stereotyping, no matter who does it,  this is an opportunity for people like me to feel some of the emotions that are felt by other groups of people (including the Japanese) who are constantly caricatured in western media. I qualify this with "some of" because of course we are not a group that suffers from historical or institutionalized racism. In other words, no white people were actually harmed by this ad.

This isn't the first time that Japanese advertising stereotypes of westerners have made the news, and it probably won't be the last. Here are some other examples:

This week, Japanese restaurant chain Gusto started running a new series of commercials. It features the above woman, a "handsome foreign man" as the chain's website says, and two comedians. So, what's the problem?

The two Japanese comedians in the commercial, Ungirls, can be funny—at times. For this spot, they are "disguised". This is a Japanese pun: "Ungirls" is written as "Angaaruzu" (アンガールズ) in Japanese, and they are disguised as "Italiangirls", or "Itariangaaruzu" (イタリアンガールズ) in the original Japanese.

In the commercial, the foreign woman sings a little jingle, asking with whom she is going to eat some Caponata. She picks the handsome foreign dude, instead of either member of the comedy group Ungirls. Part of the comedic schtick of Ungirls is that they are creepy and not popular with the ladies. That's the gag. Apparently.

The ad for “SuiDanPa”, [Toshiba]’s newest rice maker that can also make bread, shows two business women talking about their love for bread and/or rice. They are the two featured characters in a series of spots for Toshiba, but this time around, one of the women dons a blond wig, wears a fake big nose and speaks in a heavy Japanese accent and with her words subtitled in katakana. This is the normal stereotype in Japan of what Westerners, particularly white people, look and talk like. And while some have said that the ad is trying to be ironic, maybe they should look up what the word actually means, because it seems to perpetuate and even exploit that particular stereotype.
- Japan Daily Press, 2013


A commercial for Choya umeshu mocks the physical appearance of non-Japanese. 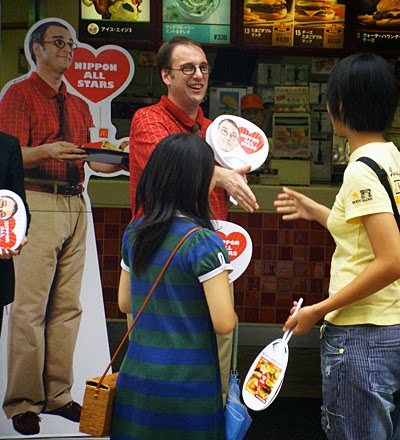 The white guy in the photo above is Mr. James, the mascot for 4 new burgers of McDonald’s “Nippon All-Stars” series. Residents of Japan who have been riding JR trains or passing by McDonald’s restaurants have probably already seen his face on advertisements. In his TV commercials, Mr. James speaks annoying foreigner Japanese (not unlike the wacky foreigner who spoke NIPPONGO in a recent Sony Commercial). Print advertisements convey his goofy gaijin Japanese by rendering everything he says in katakana [a syllabary is primarily used for transcription of foreign language words into Japanese and the writing of loan words].