Is this eating disorder ad too sexy?

It's a serious question. This woman has the typical idealized body of a model, and despite the scary body painting, the portrayal is undeniably drawing attention to her curves and bare skin.

When I think about eating disorders, I try to imagine looking in the mirror and seeing a funhouse reflection of myself that is always bulgier and heavier than reality.  That's the really scary thing about dysmorphia, as opposed to just wanting to lose weight: it's a chronic mental illness that can kill, because people who have it can't see what they're doing to their bodies: 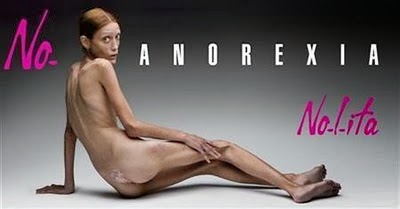 That's a corporate social responsibility billboard that No-li-ta posted in Milan during the city's 2010 Fashion Week. Shorty after the campaign was shot, the woman, French model, actress and blogger Isabelle Caro, died at age 28.

So there are a number of things to consider here:

1. Is the sexualized presentation of an idealized female body just adding to the problem of media-influenced body image problems?

2. Is the statistic misleading or confusing? While the US National Association of Anorexia Nervosa and Eating Disorders says that "91% of women surveyed on a college campus had attempted to control their weight through dieting. 22% dieted 'often' or 'always'," they give the statistic for the actual mental disorder of anorexia at "an estimated 0.5 to 3.7 percent of women." So how are we defining "eating disorder"?

3. What does the Enosh ad want the viewer to do, be aware that eating disorders are bad? There is little here to help those suffering from EDs, or to help their loved ones understand or intervene.

It may seem mean to criticize a well-meaning ad like this, but as a career social marketer I struggle with these same questions in every new campaign I approach.