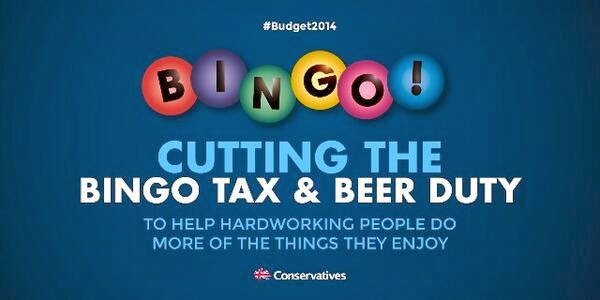 … Already long ago, from when we sold our vote to no man, the People have abdicated our duties; for the People who once upon a time handed out military command, high civil office, legions — everything, now restrains itself and anxiously hopes for just two things: bread and circuses.


According to The Drum:


Conservative party chairman Grant Shapps has insisted he loves bingo and drinks beer after he faced a storm of criticism over a poster he tweeted following the UK budget this week.

Chancellor George Osborne gave the bingo industry a tax cut and took a penny off beer duty in the budget, prompting Shapps to tweet a poster reading ‘Bingo! Cutting the bingo tax and been duty – to help hard working people do more of the things they enjoy’.

Shapps encouraged followers to retweet him and spread the word – which they did, kicking off a storm in which users accused him of being condescending. He also faced criticism for using the term ‘they’.

Mr. Shapps has since defended his message, insisting, “personally, I drink beer and I love a game of bingo." The Guardian's Owen Jones called it "so patronising it looks like a crude attempt at satire."

Here are some of the better reactions on Twitter:

@double_dex I've never been more convinced something real was fake. Maybe it's some sort of genius we haven't worked out?
— daysofspeed (@daysofspeed) March 19, 2014


Sweet Jaysus, @grantshapps, why not just stick a picture up of a bloke with a flat cap, whippets and a fucking football ticket.
— Chris Nicholson (@EraseThisTweet) March 19, 2014